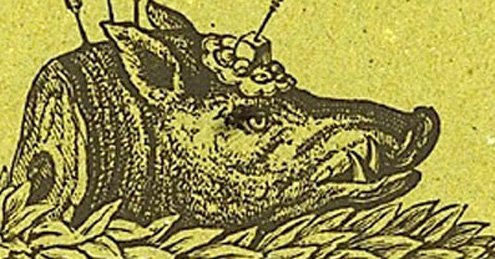 The real thing in Colonnata.
T

here’s probably no food in the world with as big a difference between how bad it sounds and how good it tastes as there is with Lardo di Colonnata. Lardo is what kids at my grade school used to call our chubby classmates after they used notes from their mothers to get out of gym class. No wonder it’s strange to think of it as something good to eat.

And to the uninitiated, Lardo di Colonnata doesn’t even look good: It is sometimes thinly marbled with meat, which highlights the fact that the rest of what may be Italy’s most unusual salumi is just cured and thinly sliced pig fat.

But once in the mouth, it makes converts fast.

The traditional way of eating lardo is on lightly toasted bread, which creates an addictive contrast in texture between the crunchy bread and the silky lardo, and a balance between the simple starch of the base and the round flavors of the topping. But there are dozens of other ways, and in each instance lardo brings to the palate a subtle but complex richness.

People near the remote Tuscan village of Colonnata have been eating lardo for thousands of years. It was originally served along with a slice of tomato between two pieces of bread and eaten as a high-energy lunch by workers deep in the marble quarries in the mountains surrounding the village.

Other parts of Italy make different versions of lardo, but the real thing could have only developed in Colonnata, where the kind of marble found in the quarries plays a role, along with the cool Apuane mountain air, and an abundance of Cinta Senese, the last surviving breed of swine native to Tuscany. The lardo is cut from the pig’s back — a 160 kilogram pig produces 25 or 30 kilograms of lardo — placed in a marble tub called a conca, and cured with a variety of herbs and spices for at least six months and sometimes for as long as two years.

Counted among Colonnata’s 300 residents are a mere 14 who operate the town’s larderie, and each one makes their lardo a little differently. Some use black pepper, anise, sage, or mixed herbs in addition to the traditional layers of sea salt. I learned a lot about the process from 65-year-old Rita Nicoli, the matriarch of one of Colonnata’s lardo-making families, who swears by a mixture of garlic and rosemary.

Whatever combination is used, it is layered in the conca between five-centimeter thick slabs of lardo. As the salt draws the moisture from the lardo, the oils and aromas of the other ingredients seep in and create the delicacy’s unmistakable taste, which would be ruined if the marble used for the conca were not almost completely lime free, like the marble from around Colonnata.

Despite worldwide demand, annual production of Lardo di Colonnata remains under a ton. Though the producers of lardo in the area have applied for DOP status — a label that prevents parmesan cheese, for example, from being made away from Parma or by alternate methods — it has not yet been granted, and so the only way to know if the lardo is really from Colonnata is to read the fine print.

There are many ways to eat lardo besides the classic antipasto version draped over toast, or the quarryman’s sandwich style. Sliced a little thicker, it’s good on its own, or wrapped around vegetables or semi-dry meats like turkey and cooked, with the lardo playing the role of butter or oil. It can also be added to soups — it’s especially good in tomato-based soups — in lieu of olive oil.

But lardo maker Rita Nicoli recommends something she learned to make as a youth: stoccafisso, a blend of onions, garlic, parsley, peppers, carrots, and a generous amount of lardo reduced over light heat. She suggests mixing it with a wooden spoon while adding white wine. When the mixture reaches the consistency of tomato sauce, add salt and raw tomatoes and cook for another minute before serving the mixture over polenta or potato puree.

What should you drink with your lardo? The locals around Colonnata prefer a regional varietal called Vermicino, which has a strong acid backbone to balance out the lardo’s richness. But any young and crisp white wine would do the trick: My favorite is Sauvignon Blanc, though finding a good Italian version of this classic can be a challenge. Try also dryer versions of Frascati whites, or the better versions of the easy-to-find Orvieto Classico. Drink a red only with small quantities of lardo, otherwise the oils from the food can start to make the wine taste bitter or flabby.