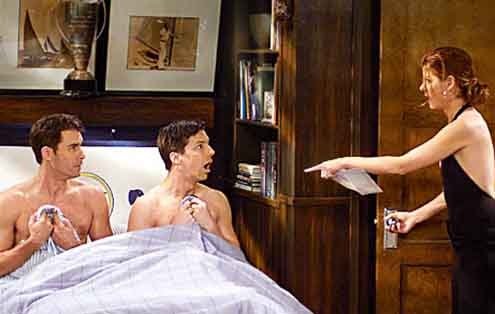 Mainstream media broke through the gay glass ceiling ("Will & Grace"), but portrayals usually erred on the side of comedy.
L

iving in Italy, I’ve discovered the English-speaking expat community contains lot of writers, both amateurs and professionals. Maybe it’s because making do in a foreign culture creates a unique perspective that outsiders are eager to express and describe. This magazine is an example.

A number of years ago I was lucky enough to join an English-language writing group composed of Americans, Canadians and Brits. It’s still going strong. We meet once a week in Milan to criticize each other’s writing. The only rule is to bring something you’ve written. Criticism is rarely easy to accept, but we’re always serious, direct and honest. We all share the same goal, wanting to make the story better. But in the end, the author has the final word.

The group’s contribution to my writing has been immeasurable. The experience has allowed me to reach a level of competence I couldn’t have achieved alone. Though I’m the only gay member of the group, and I write gay literature, I’ve always been treated — and my work has always been treated — with dignity and respect.

Like expats, LGBTI+ people can feel like strangers in a strange land. We’re often socially alienated or isolated and as such possess a slightly different perspective on daily life (essential to a good story). That may be why literature is such a strong aspect of Queer Culture.

LGBTI+ readers are generally drawn to queer literature through affinity. The hetero-normative perspective — transmitted via books, TV, radio, advertising, the internet — can be like an oppressive tsunami that drowns out everything in its path. For me, reading a queer novel feels like poking my head out of deep water and taking a breath of fresh air. All too often, gay stories and LGBTI+ experiences are censored or edited out of the mainstream, or made palatable to heterosexual sensibilities. At best our stories appear as titillating or humorous sidelines embedded within overwhelming heterosexual romantic experiences. How many times is the funny, lovable gay character the only one in the story who never even gets kissed?

We’ve fought hard to claim our place in history and our right to love. To me, the gay or LGBTI+ romantic genre represents far more than just entertainment. It’s at the core of our struggle for identity and legitimacy. After all, gay people are defined and marginalized largely based on they love.

In 1992, during my first Gay Pride parade in Toronto, I was watching throngs of people marching when a friend posed a rhetorical question, ‘What if it were the other way around and gay people were the norm and straight people were on the periphery?’

It hit me that gay people don’t really have a gay Shangri-La or utopia. My friend’s comment inspired me to try to write a book with a fictional society in which almost everyone was queer. My training in anthropology helped. More than a critique of society, I wanted my story to represent a “safe place” where LGBTI+ people could go to dream and fanaticize about other possibilities for living and loving.

On Aug. 29, DSP Publications will release my latest novel, “Eating the Moon.” Shameless self-promotion, you say. Not really. I’m just proud. It’s a gay adventure story about a young man, Guy, who washes up on the shores of an uncharted island in the Bermuda Triangle, where he and his best friend Luca discover a society that’s almost exclusively gay and lesbian. On the island Guy learns to love and accept himself. After numerous trials and initiations he eventually wins the love of a local man.

Although the island is a gay utopia, both Guy and Luca soon discover that even paradise comes with a cost.

For gay readers, a sexually open society of homosexual men on a tropical island is a paradise-fantasy come true. But my homosexual society is an imperfect one, with many flaws and injustices of its own. In fact, the society is threatened by its inability to accommodate and accept heterosexuality and bisexuality.

Just as gay people embrace and hold dear stories of straight romances, many straight people, both writers and readers, recognize that gay/LGBTI+ stories of love and romance, be they sticky sweet or rough and tumble, are an intriguing and important part of the human story. For straight readers, let this column serve as a challenge to enter into the world of our fantasies and reexamine what society might look like from our side of the fence.