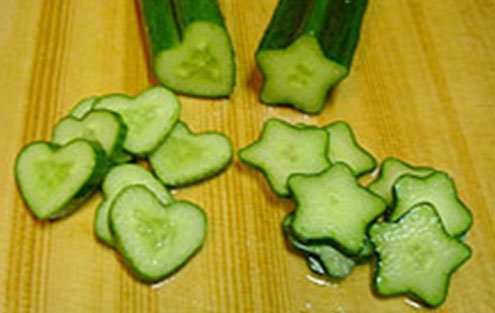 She reached for a circle of cucumber...
T

heirs had been chance encounter-friends of friends invited to the same party, in line at the same bodega, buying the same cheap beer for a rooftop party in late September.

They’d exchanged smiles and poked fun at one another’s respective six-packs of Presidente beer before they met again in the elevator bound for the top floor of an East Village apartment.

The party was packed and they went their separate ways. Every once in a while they squinted across the crow, she in search of his sparkling blue eyes, and he her curly brown hair.

When things were winding down they perched side by side against the ledge of the roof and passed a bottle of cheap red wine back and forth. Both felt the heat surge through their limbs from the tips of their hips to the points of their toes. When everyone else had gone they lingered on the curb, passing one cigarette back and forth and debating taxis versus trains, and finally, when there was nothing left to debate, he took her scarf in his two hands, pulled her close and kissed her.

Their mouths met awkwardly at first as they cocked their heads in the wrong direction and smiled so widely as to render a real kiss close to impossible. They laughed and felt each other’s’ breath, warm in the autumn night. The only sound their shuffling feet, back and forth, and finally still. She rose on tiptoe, shut her eyes, and gave into his embrace.

Their lips pressed together softly at first, and then roughly and rapidly with unquenchable intensity. Anita felt her heartbeat racing and reminded herself to breathe.

They parted ways in two taxis.

The second she arrived home she texted him to let him know she was safe (as he had asked), and he called her back.

They spent the rest of the night curled around their phones and reluctantly hung up at the first light of dawn.

They spent the next few months wining and dining, visiting museums, seeing shows, and making out in public spaces. Like a pair of adolescent tourists, they took in everything the city had to offer, and marveled at how it glittered all the more when you were in love.

When winter came, they managed to keep up the pace-they saw movie after movie, from foreign films to documentaries and discussed them animatedly over red wine afterward. During war movies and intergalactic thrillers, they draped their coats over their laps and felt each other’s fingers creeping to forbidden places, muffling their pleasure with the sounds of exploding landmines and lasers.

They spent springtime in the park, watching pink buds swell and open, and determined crocus tips push their way up through freshly thawed soil. When the first cherry trees burst into bloom at the Botanical Gardens, they wandered among pink and white clouds and when they were certain no one could see, they stretched out their trench coats on the ground behind a rose bush. Petals fluttered and fell across her naked back.

They passed the summer weekends seaside, sunning themselves by day and skinny-dipping by night.

Life returned to normal when fall came. Work schedules tightened and vacation days were all but consumed. One night they found themselves on the phone making plans when it dawned on them both that they rarely spent any time inside.

Anita came from a divorced home, and Billy had never known his mother. Neither one of them had any notion of traditional domesticity. On top of that was the fear that once they put a stop to their thrilling adventures, their fire might fade.

And so a plan was hatched. Like it or not they would spend a night at home. They would cook together, and dine, albeit by candlelight, like a “normal couple.”

They had decided on fondue and Anita set to work preparing both a cheese and a chocolate sauce. Billy had promised to bring a variety of ingredients that, in his words, “he couldn’t wait to dip all night long.”

Kiwi, carrots, strawberries, cucumbers, and fennel appeared from the depths of his backpack, and Anita sliced them with care. As she chopped she felt an arm encircling her waist. Billy grabbed a wafer-thin strawberry slice and placed it on delicately on the space where her neck met her shoulder. She shivered. When he plucked it off with a kiss, her whole bodied tightened.

She reached for a circle of cucumber, turned around, and came face-to-face with his bare chest, sighed, and with a giggle she slapped it against his belly and dropped to her knees.

Hours later, their clothes lay scattered on the floor, and the fondue had reduced to a blackened crisp. Their bodies slick with sweat and fruit juices, they untangled limb from limb.

Happy to be home.