Easy Travel to Other Planets 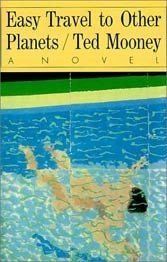 Though Texas-born American novelist Mooney has produced a steady dose of fiction over the decades (“Traffic and Laughter,” “Singing into the Piano,” “The Same River Twice”), he never surpassed his gorgeous 1981 debut, which still compels for a variety of reasons, all of them pertinent.

Melissa and Peter are — how to say it — two of a special breed of eccentrics. Marine biologist Melissa teaches Peter English. He understands, but not always. It’s halting work, for both of them. In the Virgin Islands (where she lives in a “flooded house”) the two gradually become lovers — “slowly, Peter began raking his teeth up and down her leg.”

Peter is a dolphin.

This is an environmentalist novel before environmentalism and an Internet book before the Internet. In it, the world suffers from media-whiplash, or “information sickness,” whose symptoms include “deliriously disconnected speech, apparent disorientation, and a desire to touch everything.” Circumstances, as portrayed by Mooney, in which species can easily jump their boundaries, and no one way of looking at the world holds sway. Too many people know too much, or too little, and all are too dazed to act.

Startling and original at the time of its writing, it remains swimmingly adroit all these years later. If you’re convinced technological (read web and digital) wonder is new to fiction, first remember it was an inner fiction that created technology, and then walk across this “old” bridge.