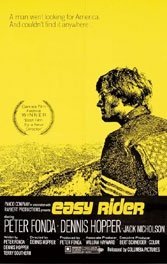 Captain American (Peter Fonda) and acolyte Billy (Dennis Hopper), counterculture bikers, have just pulled off a drug deal in Mexico and are roaring from Los Angeles to New Orleans to celebrate. They’re anti-hero cowboys in what amounts to a new-age Western about the shattered American Dream. Drugs fill in for drink and bigots for bandits. Hopper’s debut movie is fraught with foreboding. Neither Captain America nor Billy is ever lucid enough to compose particularly interesting sentences, or even to know their own plot. But that’s not the point. They live in a psychedelic world filled in by a rich soundtrack (Steppenwolf, Hendrix, Dylan, The Band, The Byrds) and the apparent benignity of the outdoors.

Until they pick up George (Jack Nicholson), a rich, heavy-drinking southern lawyer whose alcoholism helps paper over a shattered view of the union. Freedom, mutters stoned Billy by a campfire, is what America is all about, right? Not for George: “They’re gonna talk to you, and talk to you, and talk to you about individual freedom. But they see a free individual, it’s gonna scare ’em.” The role of George was a watershed in Nicholson’s career. His presaging heavy-handedly push the story toward tragedy. The message: Money can’t buy you love (or acceptance), American tolerance is a façade, and freedom’s just another word for nothing left to lose. A necessary 1960s period piece.