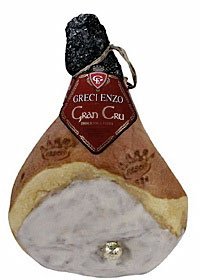 admit it: I’ve never been much for reading the fine print. I tend to ignore it on important things like pharmaceutical pamphlets and surgeon generals’ warnings… never mind food labels.

But when it comes to Italian food and wine, there is a kind of fine print that has always intrigued me, and in keeping with the Foodboxian belief that an educated stomach is, if not satisfied, at least appreciative, I set out to learn more.

The fine print I’m talking about — acronyms, actually — are denominations created by the Italian government to identify foods or wines of particular intrinsic value. No matter the label (there are currently six of them — DOCG, DOC, IGT for wines, and DOP, IGP and STG for everything else), these bold acronyms are meant to alert the sharp-eyed shopper to a product that is either — 1. of exceptional quality; 2. produced only in one specific geographical location; 3. made only through a special process and with specific prime materials or, in a best of all worlds scenario, all three at once.

“DOCG” (Denominazione di Origina Controllata e Garantita) is used to denominate wine produced in one region that uses a specific process, and which cannot be produced elsewhere. In order to be eligible for the label, the wine has to have been “DOC” for at least five years, and considered of particularly high quality. It is also subject to specific tests for taste, chemical composition and so forth.

“DOC” (Denominazione di Origine Controllata) also refers to wine that is produced in a specific area, its grapes, wine-making traditions and other local factors such as climate making it irreproducible elsewhere. Although these requirements are essentially the same as those for DOCG wines, DOC wines don’t have to undergo the same rigorous testing that their nobler cousins are subjected to.

In fact, the DOCG certification came into being only after a handful of vintners complained that DOC was being applied too liberally. DOCG wines are usually produced in a very small geographical area within a much larger DOC zone, and can easily be identified by the fancy pinkish-red government seal atop the bottle’s neck.

“IGT” (Indicazione Geografica Tipica) is the broadest of the three categories, and is simply an indication of the region or territory where this wine was produced. Many (though not all) of the wines that sport this label are a sort of elevated table wine; far from swill, but not necessarily what you’d want on the table for distinguished dinner guests.

If it’s not already clear from the fine print’s fine print, there is an unspoken hierarchy to these classifications, best understood as a sort of vinous winners’ podium, with DOCG taking the gold, DOC an envious silver, and IGT clutching the bronze and waving, just happy to be here. It should be pointed out, however, that there are exceptions, especially in the IGT category, where some champion wines are relegated because their blended composition excludes them from more prestigious ranks.

I left out a fourth certification for wines, “VQPRD” (Vini di Qualità Prodotti in Regioni Determinate), since it is a European Union certification only recently imposed and not yet as well-defined as the others.

Acronyms for the rest of the culinary kingdom are not nearly as elitist, and are designed more simply to alert you, the potential purchaser, to a product that can vaunt something especially “local,” no mean feat in a country where the definition of local food is often pinpointed to the half-kilometer.

At the same time, these certifications function as a kind of market and reputation protection, making it impossible for a pig farmer in, say, Parma, Ohio to start marketing his bacon as the world-famous “Prosciutto di Parma.”

“DOP” (Denominazione di Origine Protetta) stands for foods with particular qualities that come entirely or in part from the land where they are produced. These qualities can be strictly geographical (think spelt from Garfagnana, which owes its particularly rich wheat taste to the land it’s cultivated in), or the product of skills and methods developed especially in that area over time. (Parmigiano Reggiano is a classic example.)

“IGP” (Indicazione Geografica Protetta) means much the same thing, indicating a strict dependence on the land, climate or traditional production process in a given geographic location. The big difference with respect to the DOP certification is that by law, only part of the production needs to take place locally.

By comparison, “STG” (Specialità Tradizionale Garantita) is much less restrictive. The only requirement for an STG label is that the product in question be created according to traditional methods or processes. This means that the food has to be made a certain way, but can be made anywhere; presumably, even in that faraway land where sooner or later everything known to man will be produced: China.