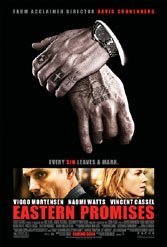 The fewer words spent on masterpieces the greater the opportunity for their spell to grip, and at the right speed. In addition to being Cronenberg’ magnum opus, this is among the best films ever made about the non-Italian underworld, in this case expatriate Russians in London.

A London midwife of Russian origin (Anna, Naomi Watts) helps birth the child of a Russian teenage rape slave “imported” into the country by overlord Semyon (Armin Mueller-Stahl), who runs a Russian restaurant front. Her efforts to track down the baby’s background — the teenager dies in childbirth, leaving a diary — leads her to the periphery of Semyon’s gangland family, including his son Kiril (Vincent Cassel). The man in the middle is driver Nikolai (Vigo Mortensen), who ambiguously but fiercely drifts between taciturn loyalty to the dark side and inexplicable compassion for Anna.

Cronenberg simply, deftly and brutally portrays the vagaries of motherland families ties, supremely male, that ensure loyalty and mayhem because they’re what’s most familiar. The fairly conventional plot, beginning, middle and end all sculpted, are secondary to the stage-quality performances of the leads. His grainy London is lifted from the spy writers of the 1950s and 60s. He cares little that some of the English dialogue may be lost to sly accents. He keeps his focus on the people. Mueller-Stahl, Cassel and Mortensen are memorable.

One scene, in which two Chechen thugs ambush Nikolai in a sauna, may be the most savagely vicious and feral human fights ever put to film, a vintage bit of Cronenberg violence that is non-gratuitously essential. “I am a driver,” Nikolai tells Anna early on. “I go left. I go right. I go straight ahead. That’s it.” But nothing here is straight. All is instead tattooed with codes of honor and the cult of family.