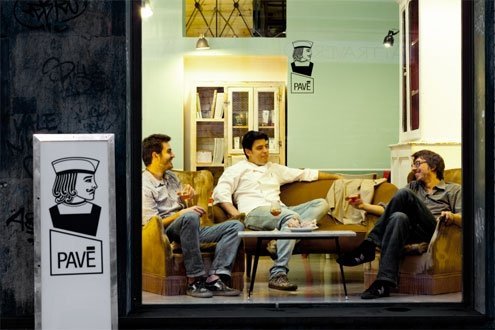 Places like Pavé, on Via Felice Casati, have changed the neighborhood's mojo.
A

bout a year ago, I moved into the Porta Venezia neighborhood on Milan’s east side. It wasn’t entirely new to me since I’d stayed nearby when I first came to Milan in the 1980s. At the tine, my acquired Italian cousin saw the area as a dangerous “casbah.” But the busy Corso Buenos Aires and the local ethnic mix reminded me of New York City.

My new home overlooks Milan’s “Central Park” —the Public Garden — and is 10 minutes from Piazza Duomo. Traditional Milanese revere the haute bourgeois Corso Magenta area while the trendy tend to go for loft-filled Via Savona. Instead, the area between Corso Buenos Aires and the Stazione Centrale is a sort of sinister nowhere — a non luogo, or no-place, identified with drug addicts (who once nodded off among the bushes along the Vittorio Veneto tram tracks) and “scary-looking” dark-skinned men (seen as “loitering” outside the international phone centers.)

Though the neighborhood hosts two gems of 1930s architectural design — the Torre Rasini (Giò Ponti and Emilio Lancia) and Casa della Fontana (Rino Ferrini and Franco Bruni) — it is still viewed with suspicion.

In fact, Porta Venezia has never been able to shake off public perception as a place of sickness and exile. Its development and reputation were shaped by the 15th-century Lazzaretto, a hospital and quarantine zone created to house victims of European plagues. A square of porticoes sealed off several city blocks. San Carlo, the tiny octagonal church that still huddles on Viale Tunisia, marked the center of the complex. The site was chosen because it was outside the walls and canal that delineated Milan’s 16th-century city limits. Its only remaining traces are a low, red brick building in Via San Gregorio and Via Lazzaretto.

When the Lazzaretto hospital shut down, the building was first a barracks and later a warren lived in by immigrants and squatters. The city demolished it in the 1880s, erecting public housing with fancy facades in keeping with other elegant 19th-century Milan buildings. But these new facades concealed case di ringhiere, working-class Milan residences with tiny apartments surrounded utilitarian courtyards and linked by exterior balconies.

When working class Milanese left the neighborhood, immigrants replaced them, first from Italy’s south and later from outside Europe. I’d usually go there to shop in international grocery stores and eat at ethnic restaurants, once rare in Milan. The ethnic place mingled with more traditional places such as Da Ilia on Via Lecco and Lucca on Via Panfilo Castaldi. In 1989 chef Pietro Leeman opened Milan’s first haute vegetarian restaurant, Joia, on Via Panfilo Castaldi. In 1996, he won the first Michelin star for a vegetarian restaurant. Change was afoot. Now, new places seem to open every day.

Pavé on Via Felice Casati has a trendy Belgian feel with its pastel mismatched chairs and sagging armchairs. Patrons from nearby design firms hunch over Apple devices enjoying the smells form the open kitchen. Pavé’s homemade bread uses a pasta madre, or natural starter, that originated in 1970s San Francisco. Its pastries are sublime — the homemade panettone will amaze skeptics who know only industrial versions of Milan’s Christmas cake.

I already loved the florist Mint Market on Via Felice Casati whose funky vases were my go-to house present. Now, you can have a panino or cappuccino in the café, sitting among the vases and plants.

My dog is also happy with his new home — his favorite park is across the street. Since Vineria opened in November on Viale Vittorio Veneto, walking him can include pausing for a glass of wintry vin brulé served from a window overlooking the street. Vineria will also fill your own bottles with fine wines sold from demi-johns. They’ll do the same with their olive oil.

In November, the owners of a Swedish brasserie in Val d’Aosta opened Björk Side Store on Via Castaldi. They sell lax, lingonberry preserves, and a wicked winter punch glögg. They also offer organically grown products from Sweden alongside pieces of Scandinavian design. Some are vintage, others part of a joint venture with a Swedish design academy.

But I’m enjoying more than food in my new home. A branch of Il Libraccio, the used bookstore chain, is located on Viale Veneto. In the fall, I navigate crowds of mothers waiting their turn to pick up their children’s textbooks. On dark winter nights, the windows glow with displays of well-priced art and design books and obscure scholarly delights.

The Cozzi swimming pool on Viale Tunisia was feared by the Milanese who learned to swim in the “freezing” water of the Fascist-era sports temple (for a Midwesterner, the water isn’t that cold). In 2008, the renovated locker rooms lost their Soviet look and the inside art deco was freshened up. It’s so nearby it feels like my personal pool.

My move is complete, meaning fewer reasons to visit Formenti, the Via Castaldi electrical supply store that’s been a staple since 1948. Their old-fashioned wooden shelves burst with the old — porcelain electrical supplies — and the new — trendy colored cords. But I’ll still find any excuse to go, because along with rewiring antique lamps they provide a smile and the kind of gallantry that never falls from fashion.