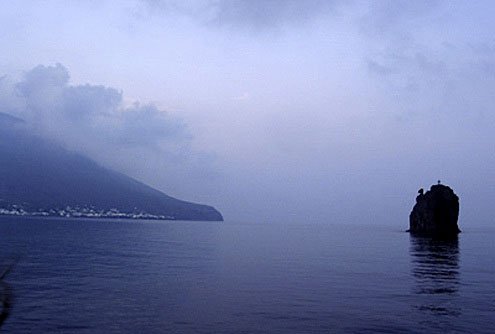 Stromboli is shrouded in mist, and its volcano in mystery.
T

he first time visited Stromboli was in my imagination. After seeing the volcanic island in Nanni Moretti’s quirky and poignant film “Caro Diario,” I dreamed of its alluringly wild landscapes, Mediterranean oleander, grape vines and olive trees. I conjured its white sugar cube houses in daydreams, encouraged by friends who had been once and couldn’t stop going back.

The next visit, however, was the real thing — and it proved somewhat more complicated.

Our travel plans having run amok, my friend and I discovered there were no direct hydrofoils to Stromboli from Palermo, and that due to choppy waters, we might not be able to get there that day. We were duly dropped off on the nearby island of Salina (part of the same group as Stromboli) and told to come back at 5 p.m. to check the status of the Stromboli-bound hydrofoil.

After a tasty outdoor lunch during which the restaurant owner regaled us with tales of island life and offered us cut-price rooms with a view, and a subsequent tour of the vast and lush Malvasia vine-growing landscape, we almost hoped the hydrofoil would not run. It did though, and the going was choppy. In the midst of a particularly stomach-churning lurch we decided swimming the distance would have been preferable.

Perched on what is the most active volcano in Europe, Stromboli is a vision to behold. One of seven islands located between Naples and the Sicilian mainland and named after the ruler of the winds, Aeolus, it’s a rousing mix of primitive landscapes and people-watching opportunities (its population of about 500 increases ten-fold in summer). Friends and locals told us that the energy of the volcano could arouse violent reactions: bring people together, tear them apart, instill the fear of God in them or make them fall in love — with themselves, someone else, the place, nature.

I’m not sure at what point the volcano made its mark on us, but we were mesmerized. Somewhere between consuming a meal of local fish cooked with olives and capers and served with cool white wine, walking home along the moonlit alleyways where no electrical lighting is allowed, and laying on the most isolated section of black volcanic beach called Piscità, the spirit of the place captured us.

With each passing day near the cobalt-blue waters the idea of leaving seemed more remote. We extended our trip three times, losing a return flight from Palermo and a boat ticket in the process. Meeting a handsome, wavy-locked, sun-kissed Sicilian halfway through our sojourn may have contributed to my own terrible and wonderful inertia, but that did not explain my friend’s willingness to stay. Yet she did.

Our contact with Iddu (the word locals affectionately use for the volcano, it means “him” in dialect) was limited to a night-time meal in a pizzeria called the Osservatorio. From the table, you can view Iddu’s natural pyrotechnic displays every 10 to 20 minutes. It wasn’t until a later visit that I actually climbed more than 900 meters to the crater. It was late in the evening and not too hot. But by the time we had made our way along the coastline, admiring the rocky outcrop Strombolicchio and its lighthouse on the way, and clambered up the perilously eroded paths of soft black volcanic sand, we were drenched in sweat.

Our guide told us we could change our tops (inspiring bra-flashing, bare chests and puerile giggling in my section of the group) and were then given plenty of time to enjoy the sunset and the fire bursts from the Pizzo, as close as one can get to the volcano, 200 meters from the craters overlooking the Sciara del Fuoco (literally “trail of fire”). This is where the lava boils up during eruptions. It was intoxicating.

Though the volcano’s last major blowup was in the 1930s, it came to life at lunch-time on Dec. 30, 2002. Iddu tossed a huge chunk of volcanic rock from crater to sea. The ensuing 33 meter-high tidal wave damaged the coastline and terrified residents. Parts of the island were evacuated. As residents began returning in April, the volcano lurched again. This time, smoke and ash rose 750 meters, rocks fell on to the tiny village of Ginostra on the southern side, and lava seethed into the sea.

Who in their right mind, I asked myself, would choose to live in the shadow of a simmering giant that could obliterate them at any time? Many locals argue, with pronounced fatalism, that the odds of being hit by a bus in a large city are greater than perishing in an eruption. With natural defiance they say they know their volcano better than scientists do and know instinctively when it is “angry.” And they may well be right. But even if they aren’t, they seem to know what they want.

It was on this visit that I also made the short boat ride to Ginostra, what locals proudly say is the smallest port in the world. Ginostra, inhabited by about 800 people only a century ago, now counts only 27 year-round villagers. This southern section of the island only acquired electricity in 2004 and outsiders rarely come here in the winter months, making it an alluring but desperately solitary spot. Closer to the sciara del fuoco, it is also at greater risk from the volcano.

In his fictionalized rendition of Aeolian island-hopping, Moretti does not make it to Ginostra but instead spends much of his time visiting Stromboli with its fictionalized mayor. An outrageous dreamer, Moretti’s mayor envisions the island having its own permanent light show and musical soundtrack, and being dotted with palm trees imported from Los Angeles. His grandiloquent plans always fall foul of the populace however, with many locals slamming the door in his face.

Strombolì locals say the character was based on a local city councillor called Cincotta. According to gossip and local folklore, one of his more hair-raising grandi opere ideas was connecting both sides of the island with a cable railway. So far he has been thwarted.

But what Moretti’s make-believe mayor and ambitious local entrepreneurs seem to forget is that Strombolì has all the natural special effects it will ever need. As one Ginostra local said so aptly of the island: It is “the end of the world but also the center of the universe.”

That’s why if you go once, you go again.

About the Author: Giovanna Dunmall

Giovanna Dunmall is half-English and half-Italian but grew up in Belgium. She first moved to Italy to do an internship at international bimonthly magazine COLORS in 1998 and soon became an Associate Editor there under the brilliant but highly irascible Oliviero Toscani. In 2006 she moved to London where she started writing about her long-time passions — green issues and ethical consumerism — and supporting several new magazine launches and small, independent publications.