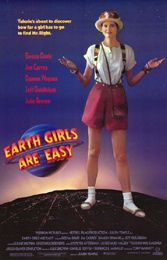 Dated, yes, but still lots of fun — I mean, what better than young Jeff Goldblum and Geena Davis in a musical comedy about space invaders? He’s an alien and she’s a Valley Girl. This is “Beach Blanket Bingo” for the alien set (which is most of southern California, or was in the 1980s). Director Julien Temple refuses to let matters get serious, which is to say coherent. He’s only interested in the “cultural” clash between furry ETs (including a young Jim Carrey) and Val (Davis), the singing manicurist.