Ear of the eavesdropper 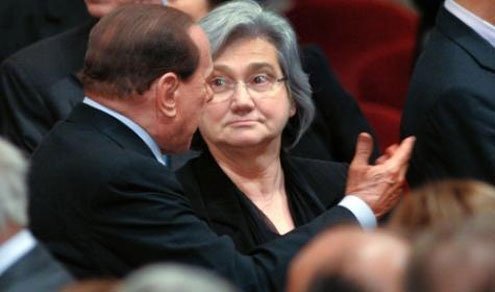 Berlusconi and Bindi: Insult city.
I

According to Italian law, public blaspheming of “the Divinity” through the use of “invective or offensive language” is punishable by a €51-to-€309 fine. Irish law imposes a €25,000 penalty for similar desecration. In my home state of Maryland, blasphemy was punishable through fines and imprisonment, or both, well into the 20th century. In Muslim-majority countries governed by sharia law, blasphemy can carry the death penalty.

My Merriam-Webster’s Collegiate defines blasphemy is “irreverence toward something considered sacred or inviolable.” By that definition we are all blasphemers in most foreign lands, or even in our neighbors’ living rooms. I may be a blasphemer in my own mother’s eyes.

Just as beauty is in the eye of the beholder, so blasphemy is in the ear of the eavesdropper.

Of all the idiotic laws devised by our species, those on blasphemy are the most flagrantly boneheaded. They’re little more than an intellectual form of Prohibition, and are radically antithetical to what philosopher A.C. Grayling labeled “the fundamental civil liberty,” free speech.

What kind of all-powerful Deity needs secular law enforcement to protect it from the concerted jests of a handful of comedians, biologists and assorted demonic riffraff? In fact, the more you scrutinize the concept of blasphemy the faster you reach the conclusion that it simply does not exist — like God, I’m tempted to say.

In a brilliant article in the Italian free-thought magazine L’Ateo, Viviana Viviani attacked the inconsistency of existing legislation. “The Mother of the Christian God,” namely the Virgin Mary, she wrote, “can be publicly blasphemed in Italy with no penalty.” Mary is not technically a divinity, whatever that means.

The deft can alter a consonant and dupe the Divinity. Laws don’t protect uncles (“Zio Porco“), animals (“Zio Cane“) or people named Diaz (“Porco Diaz“). The Divinity must be a dimwit if he can’t figure that out.

As a counterpoint, a website called “Atheist Ireland” has compiled a list of 25 blasphemous quotes attributed to the likes of Jesus, Muhammad and Pope Benedict XVI. All of us, in fact, are both blasphemers and atheists when it comes to the gods and religious sensibilities of others. Protecting all concepts of the divine from offense would mean creating Stalinist network without borders to check the world’s every utterance.

If anything needs legal protection, it’s not God but freedom of speech.

The attempt to limit expression in the service of protecting the public’s religious sensibilities is a kind of sadism. In a flourishing democracy there’s no protection from opinions you don’t like. You deal with them or find somewhere more congenial to live, preferably a cave. Religion is also a personal choice — unlike ethnicity, handicap or gender. It has more in common with political affiliation or sports fandom than biological happenstance.

In Italy, all-encompassing blasphemy laws are worded to protect even minority religious opinion. Porous terms such as “the Divinity” blaspheme the One God as much as any village atheist ridiculing the faithful in the public square.

Bible readers know that the mere recognition of the plethora of ancient godlings enraged a jealous Yahweh. But Yahweh himself blasphemed to no end against the existence of Ba’al and other false gods.

Much of the Hebrew Bible, or Old Testament, revolves around this basic tension. The result produced the kind of theocracy we see mirrored in today’s Iran, where blasphemy is a crime on par with murder and Holocaust denial is deemed the quintessence of free inquiry.

The surest way to defeat bad ideas is with better ones.

You say God exists and is omniscient. I say that is a comforting illusion.

You say Jesus was born of a virgin and rose from the dead. I say those are fairy tales.

You say Allah punishes the unbelievers. I say give him my address and phone number.

But neither of us gets a last word on the subject, one that is then enacted into law to silence the opposition. The word for that is hubris.