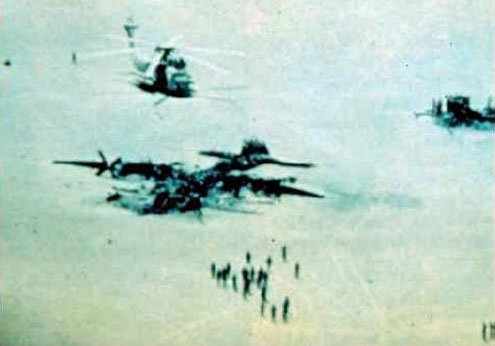 aids have a ring. So do images of commandoes armed to the hilt leaping from stealthy helicopters into the hard heart of alien nations, eyes on a prize. They are, apologies to Joni Mitchell, the star-maker machinery behind the popular song, in this case more like an anthem.

One that must rouse.

In that respect, the good O’s Pakistani exploit against the bad O’s hideout was a rare case in which cliché met gospel truth: Failure was not an option. Rouse or be ousted. History says so.

The embarrassment deepened further when ABC News launched a late night news program called “Nightline,” in which anchor Ted Koppel focused on daily events regarding the hostage crisis. Never had television so relentlessly burrowed into a crisis.

As with Osama Bin Laden elusiveness, the American public was perplexed: How could a chaotic nation with a hostile government vex the United States so openly? Why should Carter, a former submariner, tolerate Iranian arrogance?

The Bin Laden and the Iranian realities differed in two basic ways. The Americans were hostages, not targets; and the United States had to contend with the Cold War Soviet Union, which coveted Iran as part of its sphere of influence. The subcutaneous paranoia between the two nations had long before turned infectious. In late 1979, Moscow had deployed short-range missiles capable of striking Western Europe, catching Washington by surprise and further ratcheting up the tension.

Despite the profound unsteadiness of the times, or perhaps because of it, Carter decided to act. He was in the middle of a second-term bid and under constant attack from his own party, led by Sen. Edward Kennedy, who had aggressively anointed himself as the presidential heir-in-waiting. All winter he inveighed and campaigned against the Carter incumbency. Complicating matters further the United States was mired in recession.

White House thinking was clear: Either free the hostages or lose the election, or worse.

The rescue plan was dubbed Operation Eagle Claw and managed jointly by three branches of the military. Transport planes would fly from Oman and rendezvous with helicopters sent from an aircraft carrier in the Indian Ocean. They would meet on a makeshift desert landing strip near the city of Tabas, a staging area to mass forces, refuel helicopters, and fly to a second spot near Tehran. The next stop was the rescue. All of this was planned at night, with commandoes wearing night vision goggles.

At first it seemed to work. The transports touched down, albeit with difficulty. Eight carrier-based Sea Stallion helicopters then attempted to follow.

After which all came surreally undone.

The helicopters flew into a sandstorm. One turned back, two landed damaged, leaving five in working order. Local oil thieves driving a tanker rig stumbled onto the scene. A hand-held missile destroyed it, killing the driver. Then came an Iranian night bus, its riders detained.

On the American side, commanders began quarrelling over whether to go ahead despite fewer helicopter. Hours later they recommended that Carter abort the mission, which he did.

The worst followed the awful.

A botched fuel exchange triggered an explosion that blew up one of the transports, killing eight men and severely burning two others. Next came the retreat. Five high-tech helicopters were left behind in the desert, the mission’s classified logs in one of them.

Carter announced the debacle in muted tones the next day. Ironically, the Iranians had been unaware of the operation. When they finally got to the scene they found the dead American serviceman and the driver of the tanker truck.

The sandstorm and associated calamities, crowed the Iranians, were divine intervention. Not only had Iran “won,” but it had also gained four working helicopters, two of which later entered Iranian military service. Later on, a Washington investigation cited breakdowns all along the military watchtower. Overhauls followed. In his memoirs, Carter rued “a strange series of mishaps.”

In November 1980, after edging Kennedy for the Democratic nomination, Carter was routed by Ronald Reagan. He not only failed to secure the release of the hostages but also was taunted by their release on the day of Reagan’s inauguration, completing the humiliation. The bungled mission remains the emblem of his impotence. Had “Eagle Claw” succeeded Carter stood a feasible chance of re-election, strengthened by what would have been public celebration among those he freed and their liberators.

As easy at it is to focus on the obliterating success of the Bin Laden mission, which involved its own share of helicopters, including one damaged and left behind, imagining the public effect of a failure and American loss of life is incalculable, particularly given Obama’s unsteady domestic standing (the American ultra-right remains in near-grudging shock), Pakistan’s prickly pride, Bin Laden’s Houdini propensities and Al Qaeda’s propaganda machine.

None of this matters because the mission succeeded. The rousing happened. As the first atomic bomb detonated, scientist Robert Oppenheimer allegedly spoke two words: “It works.” How it works, or fails to, is the story of history itself.