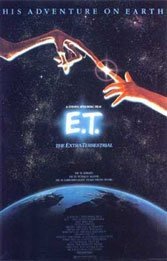 For decades, Hollywood children were either-or caricatures: Boys were mischief, girls sugar and spice, and orphans ambassadors for the abused and dispossessed. Spielberg’s sweetly maudlin tale about lost extraterrestrial sheltered by a boy and his siblings overturned the formula: Kids were made the sole owners mind-bending secrets, their insight humbling adults who were cast instead as a fearful race spoiled by big brother maturity. Free of archetype, they became what they were in the late 20th century: the clever offspring of the affluent American suburbs, often lonely, with time on their hands, available to the magical.

It’s a child’s dream: A friend materializing out of thin air to cast a spell on the day-to-day (Spielberg had his own alien “companion” as a child and the film is lovingly autobiographical). Best sci-fi film ever? Nonsense. Saccharine trifle? Cynical. Consider it a period piece ode to life between ages five and 10 in the post “Leave it to Beaver” world, a fable in which the big bad wolf is nowhere to be found and the alien outsider (for decades an archetypal ray-gun enemy) is as scared as those who give it shelter. Applaud Spielberg for good-hearted nostalgia, for taking children seriously, for producing fantasy Americana played to the hilt.