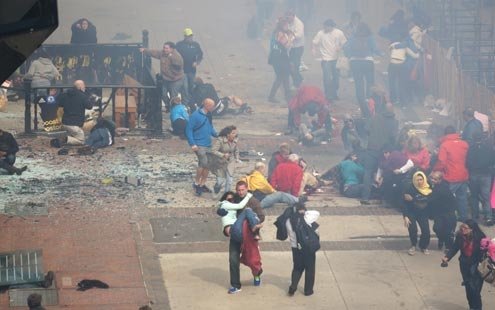 ometimes, the best words to describe an event are in a language that is not yours. Take the Italian phrase, E andato storto and how it relates to the Boston Marathon bombings.

Possible English translations don’t quite capture the sense of a phrase that translated literally means “it went awry” or it got “twisted,” “bent,” “deviated” or “perverted.” In English, you might translate the phrase as “it went wrong.” Or, “Things went off the rails.”

These English phrases imply a plan that failed to meet its objective, or that produced the wrong outcome. Or they suggest the presence of an agent or an agency that derailed a plan. “Wrong,” the opposite of right, can mean “incorrect,” or an error. It can also mean “immoral” or “bad.”

E andato storto is none of these. It is not an error; it is not bad. It leaves room for good decisions, and even moral ones. E andato storto is about how one misstep begets another until a path is bent toward a new direction that leads to unintended, unimagined destinations.

E andato storto when a security tip from Russia, a country with an axe to grind with the Chechens, combined with American civil liberties, meant failure to pursue the threat posed by Tamerlan Tzarnaev.

E andato storto when the Tzarnaev family broke up and the parents’ return to Dagestan in Russia left two adolescent boys alone in a foreign culture.

E andato storto, perhaps hundreds of times, when a language or culture that was not their own may have brought hurt or confusion to volatile adolescent males.

E andato storto hundreds of times when a younger brother chose the company of his older brother over those of his friends.

E andato storto when the Tzarnaevs’ mother chose to believe that 9/11 was a U.S. government plot to make Americans hate Muslims.

E andato storto when Dzhokar Tzarnaev’s transition from high school to college was hard, as it is for so many young people.

E andato storto when Tamerlan was unable to follow though with his Olympic boxing dreams.

E andato storto when the elder brother’s religious views made the Tzarnaevs lose touch with relatives who might have provided support and alternative expressions for their pain.

E andato storto when runners quickened or slowed their steps, only to find themselves in front of the lethal knapsacks.

E andato storto when a frightened young man tried to shoot his way out of an inevitable end.

A few seconds and a pair of knapsacks in Boston is where many paths — andati storti — converged.