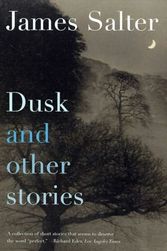 Salter’s short stories exist to cast a cumulative shadow. People wake or fall into hurt. Salter is a flawless stylist, making diamonds from carbon while probing the unlikely transformation.

In the opening story (“Am Strande von Tanger”), Nico and Malcolm live together in Barcelona. But Inge inserts herself into an already unsettled arrangement. A pet bird dies. “An hour of melancholy is approaching, the hour when everything is ended.” The best stories, “Foreign Shores” and “Akhnilo,” frolic in the ominous. Dutch au pair Truus in “Foreign Shores” has an innocent love affair when it’s evident early on that innocence is impossible. Eddie Fenn, the lunatic carpenter in “Akhnilo,” hears sounds and carves birds. His wife can no longer reach him. “There was something quenched in him.” The narrator of “Lost Sons” meets an attractive woman at a military reunion but she slips away. In “Twenty Minutes,” Jane Vare has that much time to live. In “American Express,” lawyers Alan and Frank share an Italian lover, Eda. They are “men who live by wags, whose world is unlit and who do not realize what is above.”

Much that Salter has to say concerns the panic that goes with fading. Movie star Eva befriends Mirella in “The Cinema.” Their love affairs have faltered. Their days are futile. “They were like nurses whose tenderness was dead.”