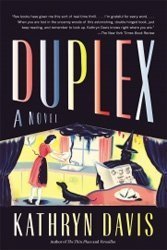 When schoolteacher Miss Marjorie Vicks thinks about her fling with the sorcerer she becomes aroused. It’s the way he makes things vibrate inside her. The sorcerer, a.k.a. “Body-without-Soul,” is married to Mary. Their daughter Blue-Eyes began as a golden teddy bear until the sorcerer inseminated it with semen he produced when Mary was a teenager and in love with baseball-playing Eddie, a Faustian time-traveler, one of many too-and-fro players in Davis’s hormonally paranormal suburban landscape. The sorcerer and the robots don’t get along especially well. Perhaps because a glowing robot scow is a fixture in the local sky and once produced the Rain of Beads, in which bits and pieces of mangled virgins fell to earth after a orgiastic robot seduction went terribly wrong, or right. Earth, meanwhile, very much resembles a1950s town, with mom and pop stores, Reader’s Digest, Nancy Drew books and “Sky King” reruns on TV. Or so it seems if you manage to set aside the fact that this terrestrial duplex is shared by robots and the sorcerer and humans (faeries and centaurs, too), the lot of them often trying to cope with often entirely earthly life perplexities, “the wish to conquer time” at the core.

This world may not be as we know it, but many things still go steady. Boys will be boys and girls will be girls. A neighborhood is a neighborhood. Only that Davis restyles hers to suit an anthropomorphic coming of age that can’t do without raptor wings, “dactilo” ports, and mischievous girls and their time-warping stories. She gels science fiction and medievalism, turns semen into orange juice, gives robots a barge to come from, and gives the devil a silver sedan. This basic rewiring of perspective is inexplicably beautiful and deeply terrible. It is also absolutely assured.

Many writers try conjuring up worlds based on hybrid legends, genetically modifying their prose to exercise ownership. Few succeed. Davis does. The dimension of this novel, an eccentrically embroiling vision of the terrors of growing up and old, is hers alone. She peoples her parallel realm with creations so intimately contrived their oddness feels importantly familiar. “Everything vulnerable was on the move, dropping shadows,” she writes at one point. The reader is also vulnerable, made to grope for ports and imagine every Alice in frayed wonderland.