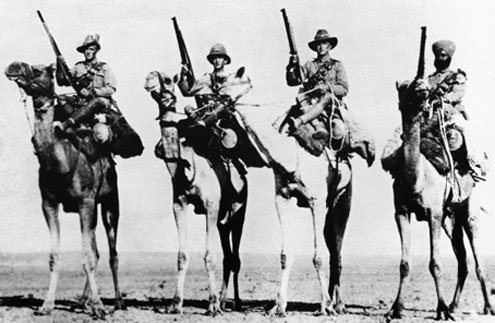 ecent Middle and Near East history has known little but armies. While the postwar West used the Russo-American standoff pursue and develop middle class commerce and values, postcolonial nations such as Egypt, Iran, Iraq, Syria, Pakistan embraced nationalism and picked at regional scabs.

Most notable was the Arab mission to destroy Israel, which produced two major wars in the 1960s and 70s and militarized the region indefinitely. Meanwhile, army coups occurred in Iran, Iraq and Pakistan, with India avoiding the pitfall by keeping its generals focused on Pakistan and China, with which it fought largely inconclusive wars.

Though much of the region’s army officer corps was British-trained, many visited or studied in the postwar United States, anointed as the new world power and the one most ready and able to help the enemy of its enemies.

When the United States invaded Iraq, it dismantled Saddam Hussein’s secular army, paving the way for badland insurgencies. Iraq’s patchwork military has struggled. As a result, Saddam-era troops are being called back into the ranks. Army rebuilding in a country that lacks effective civil and political authority is a harbinger of a coup. The only question is when.

Why the rebuilding in Iraq? As always, Iran plays a role.

For most of the 1960s and 70s, the Shah of Iran boasted his own Western-style security apparatus and secular army, considered the toast of the region and equipped mostly by the United States, West Germany, and France (Tehran also had a nuclear program backed by the same countries). But the 1978 revolution shuffled the deck. Many of the new army leaders were insurgent Islamists, their military culture unsophisticated and brusque.

That has since changed, or evolved.

Under the cover of religious nationalism, Iran’s military has tailored aspects of the Shah’s 20th century brawn to suit its own fight club needs. President Mahmoud Ahmadinejad’s venomous stew is destined in part to assuage military hardliners, a fact Washington has only recently acknowledged openly.

Meanwhile, Afghanistan’s long-dormant army is also being refurbished, Vietnam-style, by U.S. and NATO officers. Even its proponents view the project skeptically. Since the West’s Afghan force is destined to leave, just as the U.S. left Vietnam, what then? Most likely, Pakistan, its own army at the ready, will help the Taliban regroup, or at least not stand in its way, restoring the uneasy axis between Iran, Afghanistan and Pakistan, with India and Russia on the watchful fringes.

Despite America’s post-9/11 interventions, the nations most embroiled in war are the ones most likely to fall under military or paramilitary management of the kind that already exists informally in most of the region’s key “democratic” states, including Egypt, Jordan, and to a lesser extent Syria.

NATO troops making inroads in the Afghan hinterlands are fighting on borrowed time. The Afghan war is unpopular, particularly in Europe. The Taliban can afford to wait until the West walks away, which it will.

Militarized Iran may well become the new Iraq, ripe for sanctions, but attacking it is unlikely. Persia has a “Don’t Tread on Me” history, its nationalism as powerful as any domestic dissent.

What unfailingly links the key figures in each of these nations, whatever their religious predisposition, is their reliance on police and troops. Punishment and revenge are still the bread-and-butter of local political and spiritual assertion.

Egypt and Syria checks its militant Islamists by jailing or killing them (as do North African states). Iran behaves similarly with its pro-democracy dissidents. Iraq has made good on Saddam-era vendettas. Pakistan’s secret services are embedded and severe. Russia is a democracy in name alone. Further east, China doesn’t even pretend.

Whatever rationalizations the West chooses apply to the troubled future of the Middle and Near East, the name of the game is brute force, not so much toward terrorist ends, but to control and shape territories, some of them rich in resources, that have known only hostility since British colonialism brought modern weaponry to the countless vendettas of the dunes.