Dumbing down the nuts 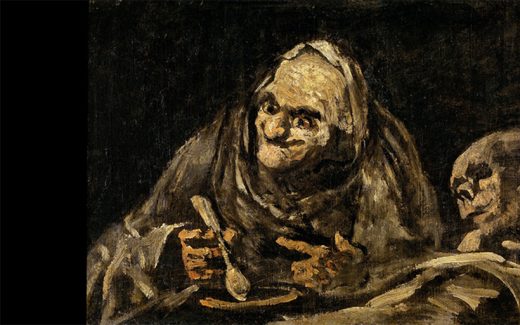 Detail from Goya's 1823 "Viejos comiendo sopa," among his so-called ""Black Paintings."
A

mong the comforts humans can summon is the pleasure of being alone. For what’s usually a short stretch of time I and me resist invasive social meddling, escape judgment, and are free of the whims of decision-makers. A lot of that time is in the kitchen.

Yet the I or me, let’s call her Cassandra, isn’t as alone as it seems. Some tangible things surrounding Cassandra play a very real role.

Today Cassandra is in the kitchen with some of them. On the shelf near the counter sits the original 1933 edition of the cookbook Sensible Cooking, when Cassandra instead reaches into her shopping bag and chooses Giada’s Italy: My Recipes for La Dolce Vita.

After browsing recipes, Cassandra decides on Risotto with Pesto. Sensible Cooking, already miffed, seethes. Not only because Sensible Cooking knows that Cassandra only bought the book because it made her kitchen look more vintage, but also because it had spent a year in a bookstore next to Cucinare. Cucinare was written by a famous Italian chef who believed in simplicity and probably would have sighed sadly about the recipes in Dolce Vita.

Without knowing the books’ backstories, Cassandra sets about making dinner.

Closely following the instructions, she takes out a pan and turns on the stove. She douses the pan with olive oil rather than butter, because it’s “healthier”. EVOO (extra virgin olive oil), which is Italian, and is extra-authentic, or so she thinks. That done, she opens the fridge, where Yellow Onion leans hopefully towards her hand. But Cassandra unceremoniously shoves the onion aside, selects a clove of garlic and slams the door in Yellow Onion’s wounded face. “Italians really do love their garlic,” Cassandra muses to Cassandra. “It makes sense that it’s the base here.”

If it could, Sensible Cooking would have grimaced because garlic is absolutely not how you start a risotto. But it lost its voice decades ago.

The rice is now in the pan. Cassandra begins making the pesto. She grabs a bunch of kale and spinach, blissfully unaware of the Italian bromide that says, Dalla padella alla brace, or from the frying pan into the fire.

Cassandra has completely ignored the main component of pesto, basil. Alarmed, she throws the greens into a blender.

She checks her recipe again and opens her pantry to examines her selection of nuts.

As the seconds tick by, Trail Mix wants to shout: “The pine nuts! Go for the pine nuts!” Trail Mix’s sheer will pushes Cassandra’s eyes towards the pine nuts. She ponders them for a few moments. Then her gaze turns to the almonds. Her hand hovers between the two nuts. She settles on almonds. From the pantry, Trail Mix and Apple Cinnamon Fruit Bars want to scream: “No, no! How can she be this dumb! It’s pine nuts, pine nuts!”

Cassandra grabs the almonds and closes the cupboard. Trail Mix feels defeated, and tries to console the Pine Nuts, who are devastated. For no good reason, they have been deprived of both leading roles and script. They listen with dread as the blender blends the kale, spinach, and almonds together. There is no hint of cheese and even the Kitchen realizes how far Cassandra has gone.

ÅThe Trail Mix feels defeated, and it tries to console Pine Nuts, who are devastated.

But there’s no going back when Cassandra decides that this meal is unbalanced without protein. This prompts her to throw a chicken breast on the stove. The Arborio Rice now cooking in the pan with the olive oil and garlic wishes that Cassandra would just drown it in chicken stock, so it wouldn’t have to live through being cruelly overcooked, hearing the chicken sizzling on the next burner or being doused in green slime of kale, spinach and almonds only to be served in a mug instead of a bowl (which seems be extra-rustic).

Sensible Cooking can’t bear to witness the gruesome butchering of a simple Italian classic. It’s seen a lot, but nothing this violent. With a tired sigh, the cookbook briefly and proudly reflects on its simple and minimal recipes, product of times when ingredients were scarce. But little does it know that that the tide of Instargam-driven meals (“If I can do what you see in this picture, so can you!”) and pop-up menu promotions — the basics aren’t trendy — means a slow but sure end to the sensible cooking era, giving Charlotte all the elbow room she needs.