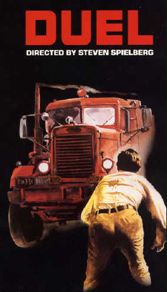 This early Stephen Spielberg package (his feature-length TV debut) applies such a primitive chokehold on the material that you’re tempted to excuse its B-movie side. Commuter David Mann (Dennis Weaver) is randomly and relentlessly singled out for annihilation by the driver of flammable rig. Spielberg demonstrates his ability to imbue objects — car, track, gauges — with a palpable sense of the sinister, something that would later assist him with sharks and aliens. The truck driver (never shown) comes at Mann without reason or warning. Objects, not the people, supply “dialogue” (Richard Matheson wrote the grunting screenplay). Spielberg’s revulsion toward unexplainable violence may be why he later turned to family themes, some overlapping on the maudlin.