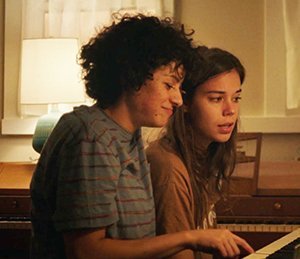 In the age of dating apps, true intimacy is a difficult goal. People spend so much time trying to gather information on potential partners from various online profiles that getting to know someone in person has become somewhat of a foreign concept. What Puerto Rico-born director Miguel Arteta’s low key comedy-drama “Duck Butter” posits though, is that first impressions can be just as deceiving in real life as online, and intense physical intimacy can sometimes do more harm than good.

It’s a classic case of opposites attract: Naima (Alia Shawkat) is an intelligent, opinionated but neurotic actress, while Sergio (Laia Costa) is an airy, free spirited singer who seems at peace with the world around her. After meeting and feeling an instant connection, the two hatch a plan to forge true companionship: they will spend 24 straight hours in each other’s company, having sex every hour, on the hour.

The film’s stroke of genius is that it truly convinces you that these two are meant to be together. Shawkat and Costa have fantastic chemistry and the characters have a way of coaxing truths out of one another, making their attachment feel genuine. It’s only once tiredness sets in and any pretenses are dropped that the relationship goes awry; what the two found charming about each other 15 hours ago is now unbearably irritating. If anything, this shows that the women got comfortable around each other too quickly. It can be difficult to fall for someone if you’re immediately so aware of their misgivings; the gradual dating process is trusted for a reason.

The one major fault here is the demonization of Sergio in the latter half. Once things begin to go south between the couple, the script quickly turns on Sergio, playing her supposed immaturity for laughs. Whereas previously the film took a more objective stance between the two women, the audience is clearly now supposed to feel for Naima and view Sergio as the problem. Arteta could have conveyed the breakdown as being due to irreconcilable differences that the two had no way of knowing when they met, but instead he takes the easy way out and places the blame on the character he considers less intelligent.

Still, an interesting experiment, worth watching for its study of both its characters and what their actions say about the place of romance in modern society.