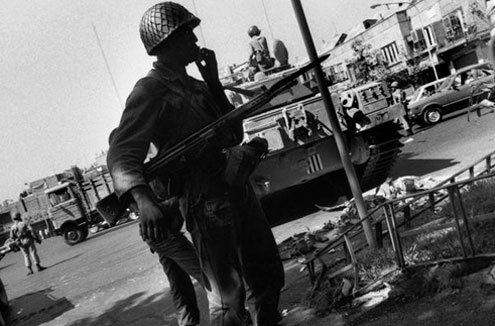 ere it was, two popes later, one dead and buried, another newly elected, and the boy wanted a rush. He wouldn’t have wanted it had he known the new pope would be dead in three weeks. But he didn’t know. So he nagged his bosses for a chance to travel.

Iran, they said, and he jumped at the chance. An earthquake, turmoil, maybe more to come, so go, they said, and he went, Rome to Tehran on a jet with cracked caulk around the windows. He needed a visa and permissions and at the airport men with automatic weapons scowled. Excitement makes you larger than life, he thought, and toured the city with an interpreter with a dented face.

He’d wanted a hot spot, but this one seemed tame, aside from the bazaar where beheaded animals hung from cleavers and dripped into alleys without gutters and the pistachio sellers looked at him with a mean kind of gusto.

But nothing happened. He saw small protests and men with beards putting up posters with a man with another beard but the script was so ruinously foreign he focused only the bearded man’s unsettling eyes.

Talking to merchants and businessmen and a few former politicians he was told – told by his interpreter, that is — that the Shah was in trouble because he’d grown arrogant and clumsy and stopped paying the Shiite clergy to stay tame, which he’d been doing for a decade, and his protection money was coming due. It seemed to the boy like a strange reason for upheaval, nothing like 1968, but he listened and took notes and kept hoping for the hotter to happen so he could write to those who would envy his marauding gumption. But nothing did happen.

Until one day in September. He was in a teeming crowd holding placards, nothing new by itself, until he heard the monotonous motors of armored personnel carriers that made their way benignly into the middle of things, thronged on all sides by so many people.

These people began by waving fists but then picked up whatever they could from the street including pebbles and stones and sticks of wood, which they threw at the vehicles and the soldiers around it, the men in the turrets ducking down from their limp machine gun.

The kid reporter, not even 25, was terrified, mesmerized, and the thrall of adrenalin’s witchcraft.

But then a single soldier pushed up like a jack-o’-lantern from the turret and maneuver the limp gun so that it now faced parts of the crowd. He waved his hand as if to say “hello” or “stop” or “now,” followed by the sound of an air compressor, or so many tires punctured at once.

This is when some people shouted and lurched, parting like a swift sea in a biblical painting, leaving only the unmoving and the stunned and the disassembled, or so it seemed to the boy, who trembled and began to sob. It was the interpreter who grabbed him by his shirttails, tearing into the fabric, pulling him under an awning by a curb near a dead dog as the machine doing the shooting moved forward through the scattering crowd.

This event would later get a name, Black Friday, and a context, the run-up to the overthrow of the Shah of Iran by Islamic agencies. But the boy didn’t stick around for the revolution. That was for tougher ones who craved that kind of heat, which the boy realized he did not, retreating, and, once back, asked never to go outland again. His wish was granted. A week after he returned the pope died again — “re-died,” said press satirists. This pleased him. He’d be kept busy and be scared less, all the while pondering the expression, “Be careful what you wish for.”