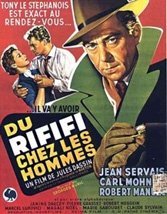 Before novelle vague (and long before anyone needed Danny Ocean), there was this: Hard-knocks Parisian losers planning and carrying out the perfect jewel heist only to be done in by their own squabbling. Director Jules Dassin offers up few frills. Ex-con Tony (Jean Servais) has an idea for a caper and gets his men together: two Italians, Mario (Robert Manuel) and César (Dassin under the pseudonym Perlo Vita) and Joe the Swede (Carl Möhner). Their noir dress isn’t built for black and white but instead defines it.

There’s plenty of physical and sexual tension, but it all goes by the wayside during the central-Paris heist, which stops the film in its nasty tracks. Criminal success, for Dassin, is only a prelude into an inevitable descent, or return, into primordial hatred — and so it is here. Nor does gender spare recidivism its agony. The women are just as cruel. Devoid of romance, Rififi (French slang for nasty stuff going down) is ice-water on tap. Do not under any circumstances see this dubbed. If necessary, forget languages and watch the bleak shapes slouch toward their unfriendly Jerusalem.