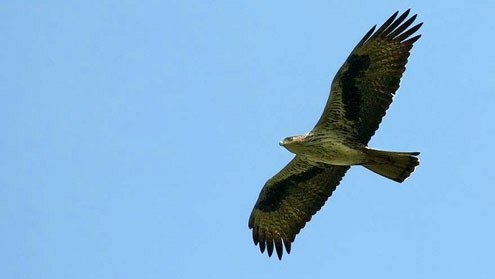 Bonelli's Eagle lives in southern Europe and North Africa.
I

t’s an inescapable truth that country living offers all kinds of health benefits. There’s fresh air, tranquility, an unspoiled natural landscape, proximity to wildlife, and freedom for children to play safely in the woods and muck about in the river.

Since I moved to my Italian farm I confess to having becoming a bit of a “twitcher,” the name given to British rare bird enthusiasts (I’m not sure why, maybe because they’re all slightly nervous, but I digress.) In most circles, bird watching is considered a bit of a nerdy activity, but I find it strangely exhilarating to be able to identify the creatures soaring above our heads. The first time I saw a Bonelli’s Eagle — a soaring southern European predator — I was so excited I ran to tell everybody I knew, and anyone else who’d bother to listen.

Eagles aside, country living has other advantages. Take noise. You can make it. Not only that, you can make it without disturbing anyone — as in the neighbors.

That said, if you happen to be sitting in an urban traffic jam, dreaming of rural life, please don’t think for a minute that you’ll be spending less time in the car just because eagles fly free. You are not an eagle.

Fall means school, and not being in a city means that school isn’t necessarily nearby. After three glorious months of freedom, you’re soon reminded of just how much time you have to spend in a car, a rural irony.

When I lived in London I biked to work, walked to shops or the cinema, skated to the park, and only ever used the car to drive out of town. I was also pretty fit. Now, there’s only one way out of the farm.

I’m admittedly an extreme case. I have five children attending three different schools on three different schedules. I live in a valley that dips 500 meters under the town at end of a four-kilometer white farm track. It’s beautiful but hardly convenient. I drive to the main road as often as six times in a day, and by the end it’s a tedious exercise.

Unlike most parents, who tend to encourage out-of-school activities, I was secretly relieved when my kids decided to give up football. I positively punched the air when ballet became passé. Yes, I know: Some of you are probably tut-tut ting. “Let them walk,” you say. “We did in our day…” And believe me I would, if only the lack of school lockers didn’t mean that my little brood must lug all their schoolbooks with them at all times. That would mean awfully long and wearying daily walk wearing a heavy backpack. No, I am destined to play taxi driver until they can drive themselves.

There are some backhanded benefits. If I ever forget to buy something I know I’ll be going back up to town. The driving time is also a surprisingly good opportunity to catch up with what your children are up to. Unlike a walk, where they run on ahead, or at home, when they can block you out with the telly. In the car you have a captive audience. So what if they turn up the radio? You still have the comfort of knowing that you’re probably the most informed middle-aged woman on the subject of chart music within a 50-kilometer radius.

If that and the Bonelli’s Eagle gives you no comfort, my advice is to buy a house on the edge of some small country town. Just make sure the landscape is flat. And bring a car.