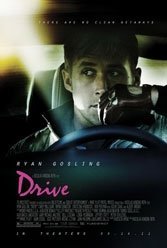 Last-man-standing movies usually come in two sizes, pint-sized or extra-large. The extra-large versions usually serve up angst-ridden good guys performing spectacularly heroic acts using fantastic machinery, but often ending up feeling none the better for their scorched earth (if they even survive). The small variety manufactures little samurais with well-intentioned hearts who end up doing violent things to make the worst less bad and protect the worthy.

Danish director Nicolas Winding Refn’s movie, billed as neo-noir, is very much in the pint-sized category. It begins promisingly, zeroing in on laconic, toothpick-chewing L.A. garage mechanic and stunt driver (Ryan Gosling) who doubles as a meticulous get-away driver. The opening sequence, in which the driver helps crooks escape, compactly merges Euro-L.A. sensibilities (dark streets, police radio, no dialogue) with American Michael Mann’s stylishness (cars and their details dressed to the nines).

But the meat of the movie comes after the never-named driver meets and is smitten with Dairy Queen-like single mother Irene (Carry Mulligan) and her young son Benicio. Irene’s Latino husband is, where else, in prison. Once released, he soon finds himself on the wrong side of mobsters, putting innocent and driver-beloved Benicio at risk. In-love driver intervenes to try to defend child and family from harm’s way. Which is when all goes brutally sour and most of the story’s characters get their guts ferociously spilled.

Any good will the movie earns in its well-paced opening 30 minutes it systematically dissipates, pitting loner driver against a heap of cardboard bad guys (including mobsters played by a smooth Albert Brooks and a snarling Ron Perlman) in a relentless, Kabuki-style bloodbath. Naturally, the pint-sized loner soon morphs into kill-all redeemer. In the end, Winding Refn hands the detritus over to David Grellier’s electronic band “College” whose kitschy lyrical refrain goes, “Be a human being, and a real hero.”

Whatever Winding Refn’s art house intentions — the movie won him best director accolades and a standing ovation at the 2011 Cannes Film Festival — it’s a shame to limit the jaggedly sincere and gifted Gosling to a movie-length poker face and stilted narrative. The story is from a 2005 James Sallis novel of the same name, but inspired, says Winding Refn, by Walter Hill’s 1978 “The Driver,” also featuring an unnamed stunt driver who goes rogue.