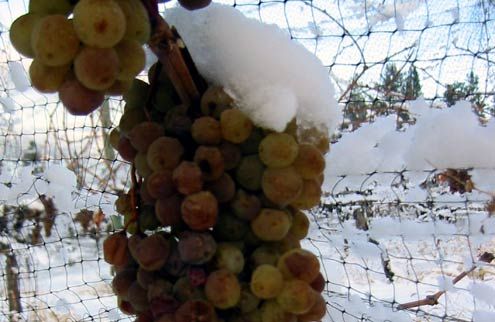 Pickers grab the frozen grapes and whisk them back to the presses before sunrise.
I

n January and February on the snowy slopes around Morgex, local vintners are a busy bunch. They come out at night, working their way along the vines, cutting down bunch after bunch of frozen grapes and placing them in baskets that must be whisked back to presses before sunrise. The sharp peak of Mount Blanc rises up behind them, towering intense and ghostly overhead, all but canceling out starlight. Looking across the valley in the wee hours of the morning, the only signs of their fervent activity are the lamps they carry: tiny bright stars dancing like wintry will-’o-the-wisps in and around the grapevines.

By the time you read this, the last harvest will have been carefully gathered and whisked to caveaus in and around Morgex under cover of darkness, before warming sunrise ruins everything. In the frigid caveaus, where temperatures are kept around —10° Celsius (14° Fahrenheit), the grapes are gently, relentlessly pressed between pneumatic-driven plates, releasing a thick sweet liquid worth its weight in gold.

The entire process yields less than 10 percent of what the grapes would have produced if they had been harvested five months earlier and turned into traditional wine.

Some claim that ice wine, or eiswein under its original German appellation, is the epitome of sweet wines, and that even the finest Sauterne, Barolo chinato and passito pale in comparison. Its most renowned producers remain Germany, where the wine was invented, and the Niagara valley in Canada, currently the world’s largest producer by volume. But in Val d’Aosta, where temperature and climate are ideal for its production, a few small wine companies have begun quietly creating an excellent Italian Vin de Glace.

The origins of ice wine are a mixture of myth and legend. Most agree the first production took place in Germany some time around the end of the 1700s, when an early frost all but destroyed the harvest. Most of the grapes froze solid on the vine, “ruining” them. But a few intrepid farmers decided to press the grapes anyways, drawing forth a liquid so thick it was like syrup. The wine produced from this concoction was intense and surprising: sugary sweet yet packing a strong, acidic punch that counterbalanced the sweetness, keeping it from becoming cloying and bringing out rich, fruity notes.

Cold is essential. A thorough freeze crystallizes water in the grapes, meaning that the liquid pressed from them has a much higher sugar concentration than normal. With higher sugar and rich in acids and aromatic compounds, the wine requires a longer fermentation period than most, usually taking upwards of a year to reach its full maturation. Some winemakers barrel-age their yields, while others prefer to bottle them directly. The extremely high acid level in these wines suggests that they could be cellared almost indefinitely without suffering.

But here experience has yet to catch up with science. Although the process to make ice wines was discovered over two centuries ago, the first industrial production didn’t get underway until the early 1960s, and a great deal of potential development remains unexplored.

For now, the most interesting aspect to explore is the wine itself. A good glass imparts hints of fresh and dried fruits, honey and toasted nuts. Like most dessert wines, it does well at the end of the meal, as long as the dessert you accompany it with is not too sweet. Personally, I think ice wines are best paired with herbed cheeses or foie gras (its most common companion Val d’Aostan restaurants).

Alas, like most good things in life, good ice wine doesn’t come cheap. In order to produce it, winemakers have to sit back and watch while winter consumes the vines, hoping that a sudden thaw doesn’t ruin the whole batch. Grape loss to birds, rot and rodents make an impact on price, and since little actual wine can be produced from a given batch, prices can rise more vertiginously than alpine slopes. For this reason, ice wines are almost always sold in half-bottles that usually run about €50 each.

Despite the fact that ice wine production is still in its early phases, there are a number of Val d’Aostan winemakers producing bottles well worth the heady price. One of these is “Il Chaudelune,” produced by the Cave du vin blanc de Morgex et La Salle winemakers consortium, a group first established in 1989 that unites over a hundred small winemakers under a single shared label.