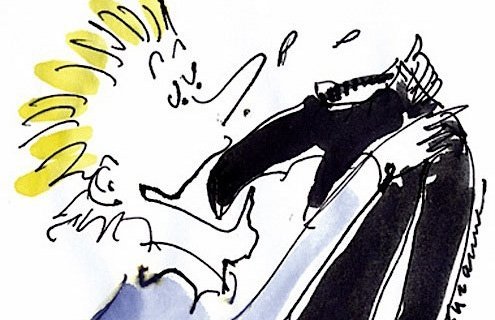 Maybe, whispers my inner Neville Chamberlain, she was merely being clever.
D

ating over age 40 reminds me of a 1960s song called “I Saw Her Again Last Night.” The band — sit still, kids — is called the Mamas & the Papas. As John Phillips sings the refrain for a 10th time (“I saw her again…”) he skips a beat after “her,” dropping the word “again.” It’s a winsome omission.

Welcome to my world.

In it lives Charlotte. Charlotte is introduced to me on Christmas Eve. “Go talk to her,” says a male friend.

Clarity of purpose defines the insightful man. I thank him.

Turns out Charlotte is from Belgium — “Which is up there,” she explains, twirling her index finger provocatively. She lives on the “AH-tikka,” which I gradually understand is not Indian chicken but the Appian Way, the ancient Roman road that winds its way to the Mediterranean coast. She “associates closely” with a United Nations agency.

“So how does American think of the movie?” Charlotte whispers conspiratorially.

Bewildered, I mention recent films I’ve seen, including “The Aviator.”

“This is wrong,” says Charlotte, who explains that she hates flying, is recently divorced, and has contentious custody of her ex-husband’s cat, known as “Charlton Peston.” (“When you are confused, you know this is the cat,” she says; clueless, I nod and smile.)

Charlotte has trim brown hair and green eyes. “I had a kind of man in Alaska on my trip once,” she announces.

A kind of man? What kind?

Her ex-husband, she continues, liked “to drink the black sweater.” This I do not touch.

But the best is yet to come.

I’m now in serious trouble. No, I reply, I am long in Rome, as in older. I was “little” in Paris and Washington, “bigger” in London, “big” in Prague, and now over 40 in Rome.

I tell Charlotte the truth: I adore Rome. I even like cats.

“And you associate closely with?”

No, no, whines Charlotte. Wrong answer. Who do I work for?

For myself, I say. I make a magazine.

This baffles Charlotte, who defaults. “Do you like food?”

I unwisely take this as a cue. “Would you like to have dinner with me?” I ask.

“Too much food is wrong,” Charlotte announces, which I gather is a Belgian refusal.

“So what happened with Charlotte?” my male friend wants to know later. I tell him about Alaska and the husband who drinks black sweaters.

I’m more hopeful. She is 30, grew up in Vermont, and wishes to discuss family values, which she favors.

“You have to believe in what you believe so long as you really believe it,” says Carrie on our first date.

I like her immediately. I tell her that I also want to believe.

I’m proud of myself. Progress.

On Date Two I hold Carrie’s hand over dinner, tantamount (for me) to Neil Armstrong’s stepping on the moon.

“What are you doing?” asks Carrie. I sense a trick question.

Carrie stares at me skeptically.

Carrie retracts her hand. What if there were things I didn’t know about her, and those things might make me not know her and might make me like her less if I really knew them? She says this in one swoop. Also, by the way, how can I be so sure I understand the concept of her being?

“I have scope,” Carrie explains, “and I might not be here soon.”

Is she ill? Is she traveling?

No, explains Carrie, she is speaking from her “book of life.” She is divorced from a famous sous chef who works in Chicago, owns a manicured boutique island on Lake Erie (with ice defrosters in winter) and when they were together always criticized her wine choices.

But you’re divorced now, I offer.

I finally decide to insist — we’re on Date Three.

You’re nice to be around, Carrie, I tell her. Really.

She has to think about that, she says.

Soon comes a text message informing me I am “not a scope of choice.”

But he has an idea: Try again with Charlotte.

And be “little” again? No thanks.

But I get a reprieve.

I meet a sculptor at a dinner for journalists covering the papal death. She is 32, Californian. Veronica is fit, smart, with a probing, ironic smile. She’s lived in Rome for six years, teaches at a local college, and is divorced from an Italo-Iranian astronomer whose speciality was “medium-sized black holes” that he probed from an Irish observatory. He insisted they marry on the beaches of Normandy.

I’m again hopeful; astronomers like stars and I like romance. And Normandy isn’t so bad, unless you’re at war.

At the end of the meal I summon the courage to ask her if I might be in touch.

Later, I send a more formal request via email. I don’t have her phone number: “Would you like to have dinner with me?”

I wait patiently. I try not to think about Charlotte and Carrie. Today’s a new day. After an Italo-Iranian astronomer what better choice than me? I’m a natural.

“Dude,” says my erudite friend, praising her undefined “cool” factor, “I have a good feeling about this one.”

Veronica, however, doesn’t. “I don’t like attention,” she writes back. “I am flattered, but I cannot accept.” I do the hunting, she adds.

Oh, and can she ask me a question: Was I the one who left lewd messages on her answering machine? “Don’t be offended.” If so, would I please stop.

Later, Veronica calls to apologize. She is gracious.

Maybe I merely misread her email, I think to myself (my female radar is as effective as England was in gauging Nazi German intentions between the wars). Maybe, whispers my inner Neville Chamberlain, I didn’t know how to recognize her cleverness. The conversation expands pleasantly; appeasement is working. I assure her I did not leave vulgar messages and appreciate someone who shies from undue attention. I tell her I make a magazine and like pets and sweaters.

Chastened by Carrie, I pay homage to scope. I cherish scope, I say. Good conversation, I add earnestly, should precede any good relationship. She agrees. She tells me of the Normandy wedding. Someone’s distracted uncle wore no shoes. We talk for an hour. She doesn’t seem to dislike the attention.

The time has come for the dreaded question… So when can I see you?

“Oh, Christopher, Christopher,” sighs Veronica, as if I’d misplaced a medium-sized black hole. “I told you I do the hunting.”

My head is suddenly filled with images of Xena, the Warrior Princess. I see Veronica foraging in a glade of wine bars amid dozens of miniature Italian men in designer thongs. I say goodbye.