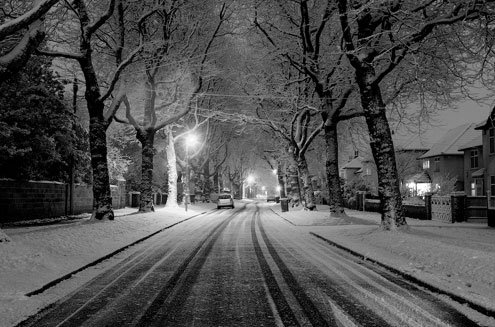 There is no wind: the snow falls steadily down like rain.

I am visiting my father for Thanksgiving. It is snowing: from where I sit in the kitchen, I can see the snow falling steadily in the woods, on the bird feeder, on the porch my father shoveled yesterday afternoon.

The rest of the family wanders in and out. “It’s snowing,” they say, surprised, and stand by the window a minute. I have a sore throat, so I nod and smile and do not answer. It has been snowing for some time now. No one stays in the kitchen for very long; they glance at my books on the table, open the refrigerator and stare idly inside, snap the television on and off. When they leave, I try to concentrate, but the blurred staticky snowfall keeps drawing my attention to the window. There is no wind: the snow falls steadily down like rain.

Yesterday was Thanksgiving, so tonight we eat leftovers for supper. There are seven of us at the table in the kitchen: my father, my stepmother, their three children, my grandmother and me. We pass the reheated turkey and stuffing and everyone comments on the snow. There is an argument over whether the television should be kept on or off during meal; there is a brief discussion of symptoms among several people who think they are catching the flu from me. At dessert, my stepmother suggests I have a fever and covers my forehead with the palm of her hand. Her rings are icy cold over one eyebrow.

After supper my father finds me upstairs.

“What are your plans?” he asks me.

Everyone has agreed on a movie; as we troop from the Wagoneer to the theater, huge petals of snow land on our hair and faces. I have a bottle of Tylenol in my coat pocket, which I rattle, on purpose, to annoy my half brother. He scans the theater lobby for friends, finds none, and pretends to slug me in the gut. I play along, doubled over, while my youngest half sister puts her arms around me from behind.

There is some confusion after the movie lets out concerning the whereabouts of my oldest half sister. She had gone to sit with friends during the film and fails to reappear, despite having been ordered to do so, at the concession stand immediately following the picture. My stepmother is anxious. My father smokes two cigarettes outside the lobby’s glass doors, in the snow. After twenty minutes, my sister comes back and tells a breathless story involving several friends who needed to make phone calls and then wait for their rides home. We are all silent in the car on the way back. My father tells my half sister she is grounded for three days. She glances at his eyes in the rear view mirror, then stares angrily out the window at the snow, which is falling everywhere in the dark outside.

It is Saturday morning, and my grandmother sits next to me at the kitchen table.

“Is it true you’re going to Washington?” she asks.

I tell her I may live there for a while. “After Christmas,” I say.

She nods quickly, glances at the ashtray by my elbow. “Your father should quit,” she says.

I myself have quite smoking; it is one of the things I tell people lately.

At lunch, my half brother breaks a cup. Them my father, making coffee, spills grounds all over the floor. Cleaning up, he smacks his head on a cabinet door I have left open. “Too many people in here!” he roars before leaving the room. My stepmother fusses at the younger children for not putting their plates in the dishwasher. They sulk, argue over what dishes they actually used, pinch each other behind her back. I am at the sink, gargling with hot salt water. “Poor baby girl,” my father says from the doorway. His arms are full of wood and there is snow on his boots.

I am reading in bed when my stepmother knocks on the door. She comes in shyly, holding a tiny plastic cup half full of something the color of emeralds. “Nyquil,” she says. Earlier I broke a thermometer shaking it down. My younger half sister collected the shivering bits of mercury for her science class.

My stepmother sits at the foot of my bed while I drink the Nyquil. It is impossible to get every drop. She takes back the cup and holds it like a germy thing, sighs a little, shakes her head. “Still coming down,” she says. This is true; outside, it is still snowing.

My father and I stay home from church. Overnight, the snow has stopped, the roads have been plowed, neighbors venture out in parkas and bright ski caps. The sun is not out; there seems to be no sky at all. My father gives me aspirin from a bottle in his briefcase. We decide it’s too cold to go for a walk. We sit at the table in the kitchen and talk a little.

“It sure is good to see you,” my father says.

Sunday evening my father drives me to the airport and on the way we talk about the snow. The plows have made huge crusty mountains at corners and along the sides of the road: these piles worry my father, and he shakes his head. He tells me it’s no joke to have to shovel through one of those. He says sometimes the plows leave piles like that at the foot of the driveway, and there’s nothing you can do. Sometimes the snow covers cars. Sometimes the owners can’t get them out until spring.

I am quiet, pondering this, when my father clears his throat. “Kate,” he says. “You know we’re very proud of you.”

I am surprised, and I can’t think how to answer. It has been two years since I won a prize my senior year in college. There was a ceremony; my father was there. “Yes,” I say.

“Whatever you decide to do with your life,” my father says. “you’ve made us very proud.”

We are quiet a while. There is the soft crunch and hiss of clean snow under the tires. “You’ve got good instincts,” my father tells me. “We’re not worried. You’ll do just fine.”

“Yes,” I say, and when I realize he’s finished I pat him, lightly, on the hand.

At the airport, my father stays with me until my boarding call. At the top of the ladder to the plane, I turn and wave at the window he is standing behind, but I cannot see anything through the glass.

— Fernanda Moore lives in Swarthmore, Pennsylvania with her two sons. Written in the 1990s when the author was in her early 20s, “Drifting” is her first published short story. Her nonfiction has appeared in The New York Times Magazine, New York Magazine, Parenting, Ladies’ Home Journal, Southern Living, and the Nashville Scene, among others.

About the Author: Fernanda Moore