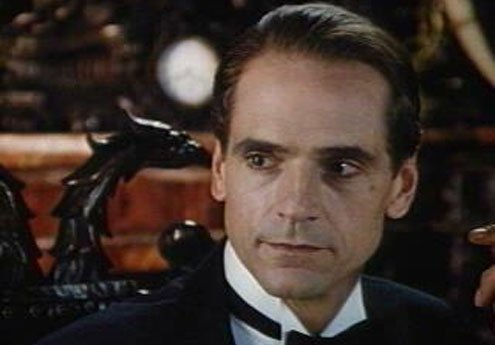 he Claus Von Bülow case was a 1980s media pet because it involved the rich, the aloof, and the decadent — soap opera’s twisted honor roll in a time before reality television had all that ground amply covered.

Barbet Schroeder’s uncanny “Reversal of Fortune” (1990), based on Dershowitz’s book of the same name, maps out the pre-appeal relationship between elitist Claus (Jeremy Irons) and the pudgy Dershowitz (Ron Silver). Their exchanges get Sunny (Glen Close) and various members of the Von Bülow clan into the story. Schroeder jarringly uses comatose Sunny as a (non-omniscient) narrator.

Ethics are hardly the point; law is. Dershowitz, a Jew, doesn’t even know whether to take the case (“If Hitler calls me up, what do I do?” he asks his son). Von Bülow finds his conviction, well, tacky. And Sunny talks from her coma like she’s been embalmed.

But the movie is all about Irons, who rightly won a Best Actor Oscar (as well as a Golden Globe) for his faultless incarnation of pretentious amorality, a performance worth viewing repeatedly for its attention to detail. Once into Von Bülow’s haughtiness, Irons can’t or won’t let go.

For the record, Von Bülow won the appeal (Truman Capote testified on his behalf). Sunny died in 2008 after more than two decades in a coma.

Another worthwhile dark side smidgeon is Stanley Kubrick’s eleventh-hour finale “Eyes Wide Shut” (he died before its 1999 release), which smacks of “Barry Lyndon” in the way light is drained of life, and life of blood. New York City doctor Bill Harford (Tom Cruise), married and straight, is tossed into 30-something sexual turmoil at a Christmas party. At the same party, wife Alice (Nicole Kidman) is flirted with, provoking husband-wife confrontation that ends, as Joyce would like it, in marital epiphany. Harford storms from the apartment into the storm, literally, but heads allegorically into lust’s waiting way.

For all the fuss, this is a movie about temptation and choices with an oddly puritanical undertow. Harford eventually get snarled up in a wealthy sex society whose membership would seem to include Satan. Kubrick liked the Freudian layers peeled by Viennese writer Arthur Schnitzler. The move is based on “Dream Story,” a Schnitzler set piece that reflects Weimar decadence.

But that decadence, at least in part, arose from a war that killed millions of virile young men. Cruise and Kidman are too picture-perfect to be anything but prettified emissaries; they don’t sweat. Also, Cruise’s Harford — whose dream-nightmare this is — seems more confused than accessible.

Visually, the darkly magical Kubrick maps out a beautiful last dance. Otherwise, this is a portentous film that, while well-worth seeing particularly among Kubrick devotees, champions infliction and reflection without giving you much reason to care.

If you want to care, and have the caring torn to shreds, turn to Darren Aronofsky’s Brooklyn-situated drug abuse movie “Requiem for a Dream” (2000), as bottomless as any pit can get. The premise is straightforward: mother, son, son’s girlfriend, and a close friend are all addicts.

Lovers Harry Goldfarb (Jared Leto) and Marion Silver (Jennifer Connolly, she of the shattered Virgin Mary face) seem at first to manage their heroin habit. But Harry’s needs grow unreasonable, then feral, finally insane. He spreads the germ. Sara Goldfarb (Ellen Burstyn), his mother, is stuck on diet pills, and she, too, tips toward madness.

Aronofsky unapologetically plunges them all into the abyss. Connolly, in a sex-for-drugs encounter in a Manhattan hotel, takes performance risks that few mainstream actresses would touch, while Burstyn’s maimed grace is a dumbfounding achievement. The last 30 minutes are a collective assassination, with each character relinquishing dignity because they don’t know what it is. Toxic stuff, so handle with care.