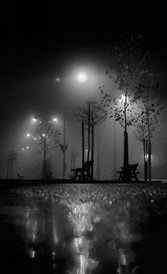 Puddle-rich Milan was once a canal city.
M

ilan’s chronic inability to inspire passion is an old theme. I am not alone in finding it felt soulless without a visible identity or graspable spirit. None of the unual explanations — the city’s dedication to work and its focus on the here and now — satisfy me. They seem more effect than cause.

On reflection, it occurred to me that the cities that I do find inspiring are ones with water (rivers in my case). Rivers open a city’s heart just as the sea opens it to the world beyond. Blessed with neither, Milan turns in on itself.

But the explanation cuts both ways.

It’s right because water is fundamentally related to society and cities. The complex and atavistic relationship bumps up against Jungian archetypes. Consider the role of watering holes on the African savannah. Water is just as important for modern cities. It cuts across social hierarchies, affecting health, transport and aesthetics.

But it’s the wrong explanation because, as I learned, Milan does have water; lots.

Water shaped Milan, anchoring its center and outlining its borders. “Mediolanum” probably refers to the city’s middle position among the Olona, Seveso and Lambro rivers or how it straddles the geological divide between Alpine and lake runoffs headed for the Po river plain. Some say the “-ate” in Lambrate and Segrate derives from Lombard or Celtic suffixes meaning “water course.”

Historians believe the site of the Duomo was determined by a spring that fed the baptistery of the earlier Christian church it replaced. The city’s major road arteries were canals dug during the 13th century to bring in stone for the cathedral.

Leonardo da Vinci worked on the Martesana canal (naviglio) and a connection to Lake Como. Napoleon completed the . Waterways linked Milan to the Adriatic. In the 1950s, the Darsena was one of Italy’s busiest ports, teeming with barges of material for the post-war building boom. The 94 bus follows what old-timers call the Cerchia dei Navigli, which were open canals until the 1930s. Tourists favorably compared Milan — yes Milan — to Venice.

Beginning in 1925, the city started paving over its watery origins. The still-open Darsena, the Grande, Pavese and Martesana Navigli are heartrending, trash-bearing lost opportunities. Other channels remain only in name: Via Vettabbia, corrupted Latin for “navigable,” carried water from the center to Chiaravalle. The Conca del Naviglio was a pool behind a lock. Barges “landed” and unloaded farm produce at Via Terraggio. Via Laghetto was the depot for the Duomo’s stone.

Water left negative traces too. Inexplicable and awkward places where neighborhoods fail to knit and traffic tangles usually hide water. Via Melchiorre Gioia covers the final stretch of the Martesana. Excessively wide Via S. Marco was a pool. Porta Ticinese was all docks and locks. Stairs to nowhere in Via Visconti di Modrone once led to water. And then there are those world-record puddles when it rains…

Puddles are not the only consequence of messing with Milan’s water. With many outlets closed, rain overwhelms the storm sewer system, once Europe’s finest. Keeping subway tunnels free of water that once had other outlets requires constant, costly pumping. Urban growth to the north deprives agricultural land to the south. Filling the Cerchia dei Navigli made it worse. The Seveso, forced underground, floods basements and garages. Milan’s agricultural landscape to the south lost its poetry when tree-lined irrigation channels were plowed over.

There are spiritual consequences too. The primordial spring under the Duomo now empties directly into sewers. The Milanese systematically cut visible links to their city’s collective memory. Now they grumble because post-war immigrants have no unifying symbols to make their own. Despoiled of identity, Milan spins its wheels in a permanent present. Forgive the metaphor, but with the well of its past capped, how will Milan nourish its future?

Seeking coherence for their 2015 Expo bid, Milan officials have asked the same question. Like patients on the analyst’s couch, they returned to the source — water. I recently spoke to Comune architects Matteo Gatto and Cesare Salvetat. Gatto’s Expo team has designed a “green and blue” “ecological network” of parks and canals connecting the Rho fair pavilions with the Naviglio Grande. And Salvetat’s project, already begun, revives green areas and a surviving mill at the Chiaravalle abbey. Gatto and Salvetat are the sort of civil servants that most encounters with Italian bureaucracy belie. Professional, passionate and prepared, their dreams — re-opening parts of the Cerchia dei Navigli, restoring the agricultural landscape — are as big as the obstacles: Getting Milan’s myriad water bureaucracies to cooperate.

May their plans prosper, and may Milan’s soul re-awake.