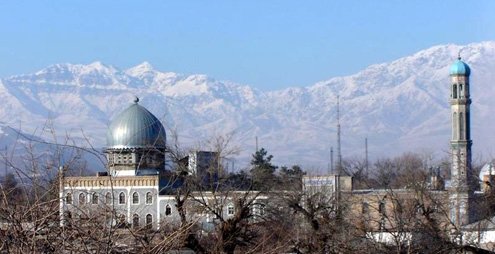 Tajikistan feels neither depressing nor hopeless.
I

’m just back from Tajikistan. For a Cold War child, visiting a once-forbidden place was a strong antidote to Milanese and mid-life malaise. Over and over, I was struck by the utter bizarreness of the country’s premise, and its evolution. Take the 19th-century colonial and imperial ambitions of Tsarist Russia; add Marxism (an abstract, European political theory inspired by and maybe only applicable to England’s Industrial Revolution); put both in Lenin’s hands, and brutally force them on a region inhabited by descendants of Persians (Bactrians and Sogdians) that Alexander the Great pushed towards the Pamir mountains, where they later defended their Persian heritage against invading Arab Muslims: The result is post-Soviet Tajikistan.

The Soviets left their peculiar mix of the grandiose, shoddy, and ineffectual. In dusty frontier towns they built tank-friendly Parisian boulevards embellished with abstract concrete objects — sculptures, for lack of a better word — that are both propaganda vehicles and urban garden gnomes.

I was in Nurek, a city of 40,000 in the country’s south. I stayed in the town’s biggest house: it boasted flashy wallpaper, a reinforced concrete bunker (the garage) and five bathrooms — only one with a sink. A single, long, swiveling spigot served tub and sink, multi-tasking for showers, dental hygiene and underwear washing. The local restaurant was Brezhnev-sized with Islamic mosaic motifs that morphed into red stars. An exile pining for the St. Petersburg of Anna Karenina must have painted the bourgeois-pastel tracery of its ceiling.

Nurek’s claim to fame is a hydro-electric dam whose poor, post-Soviet maintenance contributed to winter 2007’s fatal power failures. In the control room, you expect Sean Connery in an impeccable Bond suit to pop out from behind the red taffeta curtains and pull a gun on the gold-toothed boss seated at a futuristic low-slung desk complete with red, dial telephone and banks of flip switches. My laptop could probably handle the work of all this centrally-planned technology.

On the boulevards, schools of rusty Ladas, herds of sheep and battered vans blaring Tajik and Iranian pop-music swim between the crumbling curbs. Chickens scrabble in the grass around apartment blocks. Children build stick dams in drainage canals as their mothers stand watching in flowing traditional dresses. In addition to “Barf” detergent, markets sell basins of sheep’s heads, pyramids of cucumbers and amber-like chunks of tribal medicines. China serves a market too poor for America’s hurting producers. Without China, the stalls would be barren; no counterfeit “Phimmips” electric irons, no garish cloth, no enamel teapots, rubber shoes or gold-rimmed tea glasses.

Tajikistan is among the world’s poorest nations. Location and people are its major resources. Bordered by Afghanistan, China, Kyrgyzstan and Uzbekistan, Tajikistan is a handy drug and arms entrepôt. Remittances sent home from Tajiks working in Russia also pump up the GNP. One in four men work abroad, many paying for lavish traditional weddings that leader Emomali Sharipovich Rahkmon is trying to suppress. His Politburo brows glower from billboards and boulevard ornaments.

But Tajikistan feels neither depressing nor hopeless. Maybe it’s the Alpine scenery, the low population density, the relative cleanliness and lack of smells. Or the traditional family and social structures. Maybe it’s the cot in every yard, hamlet or scenic cross-roads. Seating from two to ten, these steel-framed platforms become instant teahouses, smoking rooms and sleeping porches with the addition of the colorful velvet quilts that air from every house and apartment window. Their conviviality may have maintained ties no invader managed to break.

Paradoxically, the absence of hopelessness may also be a legacy of colonial oppressors who left behind a 99.5 percent literacy rate and an international language, Russian, which permits emigration, however sad. They left an infrastructure too, however bad. Together with Soviet suppression of Islam, Tajikistan’s own moderate indigenous version keeps extremism in check. Women are uncovered and, with male emigration, maybe even run the place. I saw inmates from a female prison working in fields. Most are religious extremists or unwitting drug mules, or so I was told.

Back in Italy, my post-Soviet mindset persisted. April national elections highlighted how Italy drifts politically without the threat of communism to give it political structure and stability. Controlling communism helped permit Italian politicians to fiddle while their country’s economic, administrative and social structures burned. Pervasive and increasing Italian aggression and rudeness rise from these ashes. A psychologist friend says these are defensive reactions to a shrinking economic and social pie. The Naples garbage situation just underscores the burning and shrinking.

My last picture of Tajikistan is the 3 a.m. trip to the Dushanbe airport. In the moonlight, legions of street sweepers ply twig brooms among the rose bushes planted in the medians of the tank-friendly boulevards. Altro che Napoli.