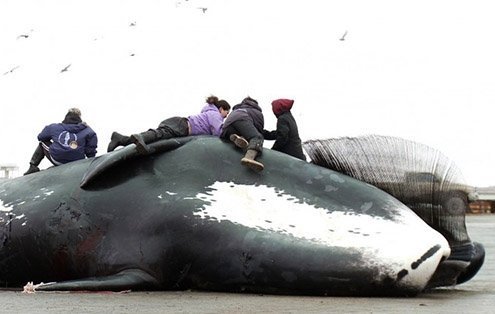 The harvest of the "agvik" (bowhead whale) remains at the heart of local culture.
&

#8220;You couldn’t give me anything to make me go back to being a teenager. Never. No, I hated it.” The remark belongs to J.K. Rowling, creator of Harry Potter, one of the most beloved fictional teenagers in the annals of literature. What it suggests is that no matter how passionately adults speak of their adolescence, the emotional tension common to that phase of life is the memory that remains most vivid.

Being a teenager challenges everyone. But being an indigenous teenager in a postcolonial, global world poses a set of very different if not at times unthinkable challenges.

Swiss filmmaker Nick Brandestini made the point in his 2014 documentary “Children of the Arctic,” a look at adolescence among Native Alaskans through the lives of Inupiat teenagers coming of age in the small Arctic Circle city of Barrow.

Often known in popular culture as Eskimos — a term now widely considered pejorative — Inuit and Yupik populations have for centuries inhabited one of the planet’s most forbidding places. Between late November and April the average daily temperature rarely rises above 0F, or -18C. Arctic survival requires near-total symbiosis with the local environment.

Filmed in English and Inupiaq (Inupiats are an Inuit sub-group), the documentary addresses the tensions between tradition and modernity in the local community. The film’s young Inupiats struggle to maintain a balance between the role they’re expected to perform as inheritors of a tradition they’re expected to carry forward, and the desire to leave and pursuing an education.

Josiah, 18, wants to be a whaling captain like his father and his grandfather. But he’s also aware of the benefits of a formal education. Flora, also 18, is a brilliant student committed to the preservation of traditions. But she’s also the recipient of a scholarship to attend the University of Alaska Fairbanks. Ace, 17, is a youth the community expects to become a local leader, but who has doubts about that role. Maaya, 17, has discovered a passion for filmmaking and dreams of moving to Arizona, where her father lives. Samuel, 14, is Josiah’s brother and a skilled caribou hunter.

Like all young people their age, they feel overwhelmed by the pressure of making life choices. But as Inupiat they also carry a burden of expectations from a local public that values customs and expects children to embrace their details. This includes putting a premium on whaling, especially whale harvesting, which includes performing ceremonies while the whale is butchered and cooked. These ancient rituals help bind the locals.

“Children of the Artic” builds on a longstanding and recurrent debate that tends to present the traditional and modern in terms of binary opposition — traditional vs. modern, always in direct conflict. For centuries, that paradigm has all but defined Western society’s views of native cultures. Consider the so-called “myth of the vanishing Indian,” the idea that Native Americans, or at least their traditions, were inevitably destined to vanish as a direct effect of modernity. Though Native Americans continue to perpetuate their traditions in the 21st-century, the “myth of the vanishing Indian” still has popular appeal.

The “vanishing” concept has a powerfully manipulative dimension. By perpetuating the idea of cultures destined to disappear as a consequence of modernity, the cultures in question are neatly excluded from any debate. Maori scholar Linda Tuhiwai Smith brilliantly summarizes this feeling as one of being “present while your history is erased before your eyes, dismissed as irrelevant, ignored or rendered as the lunatic ravings of drunken old people.”

Brandestini’s film rejects the static and adversarial tradition-modernity dichotomy while not concealing the tension between the two, and that at some point people must choose. Should they stay or leave? Should they become a whaling captain or a professor?

But by presenting these dilemmas through the eyes of millennial Native Alaskan teenagers who have dreams and desires that don’t exclude a commitment to tradition, the documentary extends thinking beyond a single, rigid paradigm. That’s of fundamental importance because no one paradigm, particular one that’s overused and often inaccurate, can fully embody the dynamics of human identity.