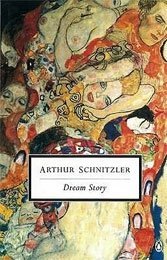 By Arthur Schnitzler, translated from the German by J.M.Q. Davies

Schnitzler’s late 19th-century Hapsburg Vienna combined affluence, debauchery and an overflow of intelligence, including the tormented and tumultuous birth of Sigmund Freud’s psychoanalytic universe. The city, a middle class bastion, anticipated the anxieties commonplace a century later in most Western capitals. But sex and sexuality remained largely off limits. Schnitzler’s little foray into the literally dreamy complications of lust was considered fringe literature. His fellow Austrian Adolph Hitler, both bitter and envious, would later call such work “Jewish filth,” since the local banking and medical professions were chock with successful and highly educated Jewish members. By 21st-century standards this novella (“Traumnovelle”) contains little that’s risqué, nothing that’s filthy, but a great deal of borderline provocation.

An affluent doctor named Fridolin, married to Albertine, with an angelic daughter, grows both weary of his marriage and jealous of his wife’s “unfaithful” dreams (they’re a modern chatty couple). Unable, and unwilling, to keep his urges in check, Fridolin talks himself into crashing a sex-themed masquerade ball — a sinister place he has no business being. At home, his wife dreams of sexual adventures in which she betrays him (“No dream is altogether a dream…”).

These two occurrences, when they collide, will shake the martial moorings. One floor beneath the obvious action is Schnitzler’s psychiatric realm, in which a man’s sexual cravings leave him at the mercy of an “incipient nervous collapse.” Arousal is an abyss. Indulging it requires a potentially lethal charade. At the same time, lying lubricates excitement. Fridolin fears but vaguely likes the idea of being seen as a “hardworking reliable progressive doctor, a decent husband, family man and father, and at the same time a profligate, seducer and cynic…”

While a foretelling of bourgeois sexual hypocrisy, and an effective one, it’s also an affirmation of husband-wife ties, which sees Albertine tell her guilt-ridden husband, “Never enquire into the future.” Dialogue defuses deceit, a central therapeutic precept. Made into an unconvincing (and unfinished) Stanley Kubrick film called “Eyes Wide Shut,” his last, with the action set in and around New York City.