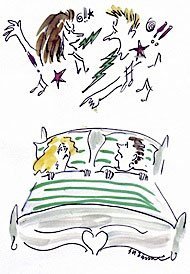 Plaster flaked down onto the duvet...
W

e decided to buy a Rome apartment in a moment of despair. It was 1 a.m. and I’d had enough. My neighbor’s TV was still blaring so I stood on the bed and tapped the ceiling with a broomstick, watching plaster flake down onto the duvet.

At that point, my husband Germano said the obvious: “Maybe we should start looking for a quiet place of our own.” The sleepless weeks had put us over the edge.

The first set of apartments we saw looked the same. We soon realized that €500,000 meant moldy cracked and crumbling ceiling, heaps of clothes in every room, the smell of yesterday’s dinner. It meant apartments with one dark wide corridor, and sad dingy rooms calling from all sides. We could remodel, yes. But we couldn’t remodel our way out of the ground floor and accompanying street noise.

We’d have to buy our way up.

“Attico. Top floor is the way to go. Less noise and more sun,” we told ourselves.

After five telephone calls and three rescheduled appointments, we met Fabrizio late on a Saturday morning in Monteverde Vecchio.The nice part was the blue sky and the sunny day. The rest went this way: €729,000, no elevator, and five flights of stairs. “The apartment comes with a parking space,” said Fabrizio. Germano lit up at the idea as we puffed up the stairs.

The inside was empty and sunny with thin lime-green walls. The kitchen was a buco but the terrazzo was the size of an enormous master bedroom. Strangely, one part of it was fenced off and draped over with tennis-court tarp.

“That’s to hide part of the terrace from the neighbors so that piano piano it becomes part of the interior. Then the walls of the apartment can be knocked down to include that space. Otherwise it’s illegal.”

Ah-hah! So covering it with tarp makes it all legal. Good to know.

Germano was inside, roaming from room to room, knocking on the walls. “Which of these are tramezzi?” The house was built with paper walls. I could hear the echoing of their conversation from the terrace, where I sat on a weathered bench under the sun, eyes closed.

Apparently all of the walls were tramezzi and could be knocked down.

But Fabrizio had other things on his mind: “Questo è uno sgabuzzino, però potrebbe diventare un bagno.” A closet into bathroom. OK.

Just about every room he recommended reubuilding into another kind of room — the storage room should be a bathroom, the entrance should be an office, and so on. Just redo it, Fabrizio concluded. Oh yes, and his agency was up to the challenge — for €30,000.

I admit I’m never really certain just how large an apartment is because some spaces are measured using commericiale parameters (including the width of the walls) while others use calpestabile (no width). In Rome, walls can be wafers or slabs.

It’s hard to know right off if a place is a “deal” in terms of price per square meter, which varies by neighborhood. You’d need to create an Excel spreadsheet and match prices to square meters based on where the place is located. Fabrizio’s fixer-upper penthouse didn’t strike either of us as a deal.

The next Saturday, we drove to Via Dandolo on Germano’s Yamaha 300 to our ormai weekly Saturday appointment. The tree-lined street begins in Trastevere and winds upward toward Monteverde. I called the agent when we got there, “Signora, siamo qui…”

“Okay, I’ll buzz you in. The owner of this potential nuda proprietà is very sick, so I don’t want to leave her alone to come down.” This was our first hint of pantomime, but we were blinded by the sight of the parking space inside the gate and the marble staircase that led to the fourth floor.

Nuda proprietà is real estate code for an apartment sold by an aging owner at a reduced price. But there’s a catch: You get the flat only after the owner dies. It’s a practical if macabre way to keep the real-estate market churning.

The apartment had Venetian mosaic floors, high ceilings, marble windowsills, and a large glassed-in terrace off the kitchen with a panoramic view of Rome. We were swooning.

One drawback, however, was that the electricity, wiring, and plumbing had to be completely redone — which meant tearing up the floors. Goodbye Venetian mosaic. As a nuda proprietà, we could get the place for just €800,000, but when we’d actually move in was beyond our control.

The agent took us to meet the proprietaria. Immediately, we got the medical report. Whispering, the agent said: “È molto malata — she’s 79-years-old with a brain tumor.”

Our death’s door signora, meanwhile, looked as if she’d gladly jump out of bed and do a jig. Her eyes glowed as she chatted, clearly pleased for the company. Then, remembering her role in the charade, she coughed hard and unconvincingly, “I’m old… What is it I was saying?”

After a last wistful glance at the nicest apartment we’d seen yet, Germano turned politely hard-nosed. Was the signora’s alleged illness “tutto documentato?”

“Si, si. I am an old friend of the signora,” said the agent. “We’re only showing the apartment from 1 to 2 p.m. because the doorman is on break at that time; we don’t want him to realize that she is doing a nuda proprietà. The signora doesn’t want to leave anything to her relatives. One of them is a famous author.”

The signora, we were told, would use the money from the nuda proprietà sale to spend three months a year in a five-star hotel in Sardinia. She had one caretaker in Rome and would have a second one in Sardinia. Interesting plan. Lucky lady.

It’s obvious why a nuda proprietà would appeal to the elderly without heirs, or in the case of the signora with heirs you want to exclude. You avoid leaving your property to the state, use the sale income to live more comfortably, and ignore the fact that the purchaser has bunches of Voodoo dolls with your name on them. When a “grieving” family finds out about such deals, drama can follow. If they find out before, leave town.

Since we wanted a place right away, a nuda proprietà felt too creepy to pursue.

Accelerating the search, we scheduled an appointment for a Wednesday after work. These are the worst kind: It’s dark, you’re tired, you want to go home, you’re on the run. We decided to look closer to Trastevere itself.

Scooting over from work, we met outside the latest apartment where we met an agent with an engaging smile, a firm, likeable handshake, a large frame, who started cracking jokes about his wife as we entered the tiniest of elevators. My purse pushed into his protruding stomach.

And here we were… in the doctor’s office.

That’s what it seemed like. First came the big foyer — perfect for waiting room patients. What do they do with it, I wondered? I imagined the occupants standing around with opened umbrellas. Given costs, even small spaces needed to be put to good use. But this?

Details jolted me back to reality. The heating was condominiale not autonomo (another key distinction), which meant that instead of paying for what we used, we’d divvy up payments with the other resident — including those where the air’s so hot you can’t breathe.

We walked out of the waiting room, passing exam rooms one and two, and into the first bedroom with its harsh florescent ceiling light and maroon bedspread (only the bedspread seemed out of place). The kitchen was more of an office coffee-break space and the bathroom had a soap machine over the sink.

Enough was enough. Time to go home and make dinner. Leaving, I felt like I should be filling a prescription, and that’s when I saw it, the gold plaque engraved in black — “Sessuologo,” it said, and listed the doctor’s sex therepy practices. She’d spent her life living under that florescent lighting, like a frog in an aquarium.

That night, the neighbors below us had a huge fight, running through their apartment screaming and slamming doors. The neighbor on our right talked with his cousin about pharmaceuticals. Our friendly upstairs lady played three straight hours of Beethoven.

At this point, we rebelled. We turned up Laura Pausini “Io Canto,” Germano transformed a wooden ladle into a make-believe mike, and we belted out music with the best of them.