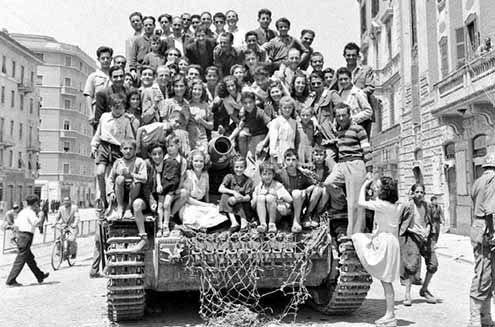 Italy's view of the United States is still conditioned by Rome's June 1944 liberation.
I

talian mainstream media is beginning to set aside Donald J. Trump. That’s not to say his erratic forays have vanished from front pages or news feeds. They haven’t. But nothing he says or does packs quite the same punch as it did 60 days ago.

Part of the reason is Italy’s own winter of discontent, marked by earthquakes and their corollary calamities as well as an ongoing psychodrama at the Rome mayoral level. Add to that the Democratic Party, the country’s largest, which is in open crisis, and the endless braying of reactionary populist Beppe Grillo. Down the battered European street, in France, Marine Le Pen’s rightists are threatening to pull out of NATO and the EU if given a mandate in June’s all-important presidential vote.

But beneath these distractions lurks something akin to incredulity. Italian journalists who long placed the U.S. on a pedestal now struggle to make sense of an America governed by a man who behaves like a known Italian quantity.

The Italian in question is Silvio Berlusconi, who reveled in blaming pervasive Communists and idiotic journalists for any and all setbacks. Over time, the pattern morphed into parody, turning banal until sex scandals added new spice to the old mix. Berlusconi’s gaffes, indiscretions and self-serving legislation — much of it passed while he was under criminal investigation — became for the leftist press what Trump is to the U.S. liberal media today, a moral eyesore to be dismantled at all costs. But none of this fazed the short and bombastic prime minister, who found solace in the joys of martyrdom and complaint.

That this Latin ethos could be so easily transferred to the U.S., host to the American Dream, limitless possibility and the maker of Bob Dylan, is, well, shocking. And disorienting.

The country’s rightists, which in theory should be cheering Trump, have lately stepped back from that pulpit, as if unsure just what to make of a rambling president who doesn’t seem entirely coherent about his likes and dislikes, aside from loving to be loved and hating criticism.

Trump is no Berlusconi. The latter knew political gamesmanship. He kept his friends close and his enemies closer, patting all on the back when necessary and keeping a Cheshire cat grin alight on his cosmetically enhanced face. If governing failed to keep him honest, it did at least get him to play by multi-party ground rules, though he took constant shortcuts. As a chief executive in a presidential system, Trump is unfettered by such parliamentary restraints.

His thin-skinned tempestuousness is instead giving rise to a nonmilitary civil war that pits the East and West Coast’s progressive intelligentsia against a ferociously anti-intellectual middle angered by its own joblessness and now infatuated by the twin allures of intolerance and exclusion, the whole of the greater grunge whipped into a frenzy by a presidential master-of-ceremonies who enjoys behaving like a loud lion-tamer with a reckless whip. It’s a 1930s-style beer hall conflict that makes little sense to Italians schooled in a larger-than-life vision of postwar U.S. democracy as combative, assertive, even bullying, but always intrinsically aware of fair play and disdainful of tyranny.

This new America with its occasionally fascist inclinations looks increasingly like Italy: chaotic, contradictory and fueled by conspiratorial myth-making. It’s an unnatural state of affairs most local writers and commentators have yet to fully absorb. Trump simply isn’t the sum of an America anyone knows or can yet properly define. For now, Italy bides its time, minding its own business, looking to its own woes to till headline acreage. It seems content to allow the once-venerated U.S. its Berlusconi “moment,” all the while working to reconfigure an American Dreams that now reeks of obsolescence.