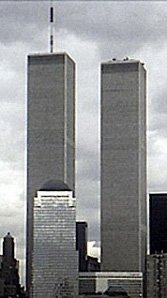 Use your imagination.
A

few days after the destruction of the Twin Towers I remarked that a “shortfall of imagination” among American authorities and citizens contributed to the magnitude and nature of the catastrophe that had befallen the United States. It had come to pass, I wrote in The Prague Post, because we failed to imagine the consequences of syndicating our most gruesome fantasies into the minds of disenfranchised literalists looking to make a blood mark. We also failed miserably in measuring the evident importance of symbolic objectives, a limitation that began after the first World Trade Center bomb in 1993.

Now, I might as well accuse Tom Kean of plagiarism. Kean, the chairman of the congressional commission charged with investigating what American knows only as 9/11, chose to underscore “a failure of imagination” in presenting the conclusions of a two-year probe into what went wrong.

The Kean-Hamilton report is in every sense typically (and scientifically) American. Its preface dutifully cites the number of pages it reviewed (2.5 million), how many people it interviewed (more than 1,200), the days it was in full session (19) and its public witnesses (160).

It describes an enemy (Al Qaeda) that is “sophisticated, patient, disciplined, and lethal.” The enemy’s hostility “to us and to our values” is “limitless.” It seeks to annihilate “religious and political pluralism, the plebiscite, and equal rights for women.” (This last bit sounds forced.) “Collateral damage,” the report adds, indulging hyperbolic panache, “is not in [the terrorist] lexicon.”

It’s hard to quarrel with a document produced by sincere and reasonable minds. It’s harder still to do so while visiting Washington, the city of my youth and adolescence.

Yet a few observations are in order.

Self-criticism greases modern democracy, particularly in nations where guilt is a lubricant. It’s the noisy vulgarity that keeps totalitarianism at bay. The Warren Commission report, though pilloried by conspiracy theorists, remains a masterpiece of cumulative grief, a tome of indirect caring. It embellished the Kennedy myth through its heft.

Americans like reports, statistics, summations, and explications. They burrow into box scores, the minutia of baseball, which detail the performances of teams and players.

This accounts for the importance of the Kean-Hamilton report. Since September 11 and the subsequent invasion of Iraq the world known to most Americans has taken on an unremittingly menacing face, fueled by non-stop television news focused on victims, villains and redeemers.

This has produced palpable anxiety and a cultural shift that has awarded terrorism, and terrorists, their place in pop culture. Color-coded references flavor sit-com language. TV villains are terrorists not dictators. Homeland Security has replaced the FBI as law enforcement icon. Reality programming emphasizes live-for-today vanities. Revenge is good. Ironically though, apart from a few hideous days, the United States has remained free from native-soil terrorism.

What’s happened instead amounts to a collective borrowing from the events of three years ago, making a nightmare into nationalist folklore from which to borrow and extrapolate, define good and bad, measure fate and future. If September 11 amounted to falling off a bike for the first time, the response has been to remount gingerly, wearing an assortment of pads. But the act of riding is no longer benign.

The report bemoans innocence lost and intelligence poorly gathered, but the rest is melodrama. Kean, like so many others, felt compelled to warn of a “possible — even probable” future attack “of even greater magnitude.”

This American sense of “sequel,” the cultural locating of terrorists as nefarious moviemakers eager to build on their first hit, irrationally animates most all those who comment on the post-September 11. Many are attempting to see tomorrow’s movie to explain and protect today.

I have no wish to play Pollyanna in a marred world. I do object to inflating dread to rationalize occasionally hysterical policy. I also object to the breathless idea Al Qaeda agents are probably preparing to use nuclear weapons, lethal bacterium and chemicals in the months and years to come (not obtaining them, using them).

So far (a decade, not a year), Al Qaeda and its countless splinter groups have demonstrated tendencies that, while ruthless, are more in keeping with political resistance to secular and Western regimes than with kill-all global nihilism. Though it uses martyrs, its leadership is vain, greedy, and wishes (in Taliban style) to impose temporal influence. To control Saudi Arabia you cannot destroy it.

As political theorist John Gray has brilliantly observed, Al Qaeda uses and abuses modernity’s machinery, gumming up basic assumptions in an effort to force the playing field level and aggressively promote a future the West finds abhorrent. That does not mean it is out to blow up the world.

It’s a pity the Kean-Hamilton report doesn’t pry the lid from this box. It’s too bad few see September 11 in its alternative guise, a brutally clever exercise in psychological and physical warfare that may not need a second edition so long as America dwells on trauma, compromises optimism and listens only to the sound of its own martial arts. The oxidizing of American hopefulness, the substitution of global reasoning with a new Manifest Destiny, was central to Al Qaeda’s reactionary intentions. Revolutionaries provoke, absolute revolutionaries provoke enragingly.

Again, the Kean-Hamilton probe shies away from motives. Hamilton does acknowledge that the United States should better address “the battle of ideas” — which I take to mean how globalization-gone-awry can cause resentment — but the wording is as always bellicose: battles and wars.

Ultimately, though, Kean sums up his concerns in a statement Al Qaeda can relish: “We believe we are safer today. But we are not safe.” It’s FDR thrust into full reverse.

In restating the dark divide between enlightened states and encroaching barbarians, the Kean-Hamilton report is in some senses merely towing the patriotic line. But it’s also promoting an image of society schooled to view the future with dread, a new insult to imagination that is as defensive as it is unwise.