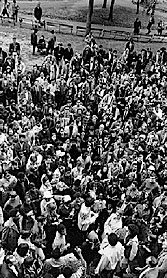 Middle class students imagined themselves as redeemers in a pseudo-intellectual fight against authority.
H

aving come of age during the Vietnam War and voraciously consumed newspapers over three decades, I can safely say there’s little to choose from between the rueful anger of the late Vietnam period — 1970 on — and the similar emotion that now hovers over the mess called Iraq.

Even a year ago, the observation would have been riskily liberal. Since then, domestic opposition to the war has grown and the protective veneer of post 9/11 patriotism, which ostracized critical thinking, has been largely peeled away. Midterm election results, while not necessarily an anti-war vote, did George W. Bush no favors. His defense secretary, once an untouchable asset, is gone. Washington strategists nibble at the once heretical idea of drafting Syria, Iran, and Jordan to pacify Iraq. The notion that Iraq may again require strong-arm tactics of a less-than-perfect leader is no longer dismissed as nonsense.

Liberal columnists such as The New York Times’ Bob Herbert (he’s not alone) are behaving as Anthony Lewis did in the same newspaper 40 years ago. How, asks Herbert, can Americans shop giddily while a foreign population goes up in flames?

The war in Iraq, by contrast to Vietnam, is not moored to middle class, urban life. When middle class students were shielded from compulsory war by the end of the draft a Darwinian artery was severed. Conscription is what gave foreign war its domestic electricity.

Vietnam soured when it became a troop-drainer (550,000 at its peak) whose tentacles reached into college campuses. The sons (not daughters, then) of writers, businessmen, and executives — urbanites of all stripes — were tossed in with the black and the rural in a jungle folly that scared them witless. Some of the elite actually died.

The intention of the draft was old school; patriotism should not be abstract. Its actual function was to narrow (or seem to narrow) the gap between entitlement and the preternatural obligation risk death for country, without regard to the wisdom of a given foreign policy.

College students rose up against Vietnam because it threatened them directly. Two American presidents placed them in harm’s way and showed no signs of backing down. By 1966, it was clear the draft risk was real and growing. Resistance seemed the lesser of evils.

The military argues persuasively that miscast collegians would just be in harm’s way. Politicians promote military service as a career choice, not an obligation. Force-feeding war, they say, is no more rational than obligating city dwellers to do police stints.

But there’s a paradox.

If a country’s troops are M-16 bureaucrats, salaried blue-collar workers hired by a government to carry out orders, critical thinking is inconsistent with the terms of their employment. Soldiers are brave, hi-tech janitors sent to accomplish a plan. When a war goes bad, they don’t have an audience. The university connection is long outdated. Post-millennium students, romping in the youtube-myspace virtual world, have no reason to consider war threateningly. It’s what Americans call a “disconnect.” The media can create a dramatic verbal, visual bridge, and sometime add context and criticism, but public video has its limits in a reality ruled by variations on personal mischief.

By 1970, with draftees still heading to Asia, middle class students imagined themselves as redeemers in a pseudo-intellectual fight against authority. Like France in 1968, when workers and college students briefly joined forces, American anti-war activists took their self-centered cause — staying alive — and made it brethren to others: racism, the poor dying and massacring for the rich, the military industrial complex, and so on.

But the mission of opposition, by then steeped in music and literature, still depended on a real and romantic association with the war. It hinged on defying forces that made young men fight for a gruesome kind of righteousness.

The righteousness certainly hasn’t diminished. It was grossly evident until the awfulness of Iraqi reality made the spin-control dial go awry.

The problem isn’t that most 18-to-24-year olds don’t object. Some do. But it’s abstract objection. This war simply doesn’t jeopardize large numbers of middle class soldiers. It doesn’t kill students. It doesn’t slow or end careers. The victims are America’s volunteer under classes and faceless civilians who are pitied as a benighted but perceived as alien.

This is the first American war in which soldiers are volunteers obligated to government leadership without a fallback position among the disaffected. It’s conflict as a task undertaken only by the willing, excusing a population and its ruling class from both responsibility and accountability if they wish instead to deck the halls.