Dr. Strangelove, Or: How I Learned to Stop Worrying and Love the Bomb 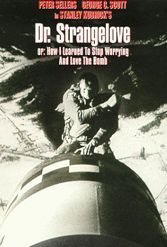 Though Peter Sellers’ Hitler-cum-Kissinger (pre-Kissinger) portrayal of Dr. Strangelove sticks in mind, Stanley Kubrick’s rangy satire is an epileptic fable that won’t bottom out. It’s as if the end-game scenario gives him a free pass — which it does, sort of. He billed this strange trip as a “Hot-Line Suspense Comedy.”

Air Force General Jack Ripper (the imposing Sterling Hayden) loses his marbles and dispatches an airborne flotilla of B-52s to bomb the Soviet Union. Communism, he explains to meek British Group Captain Lionel Mandrake (Sellers again), is polluting bodily fluids and must pay. But the Russkies have a bird in hand: a “doomsday device” that will produce global conflagration if triggered. The predicament leaves U.S. President Merkin Muffley (guess who) to work out mankind’s fate in a war room that includes Reichstag fugitive Strangelove — the Sellers treble — and overwrought General “Buck” Turgidson (his majesty George C. Scott). Scott and Hayden, though never on screen together, grudge it out over who can better run riot with caricature. They both win.

What’s lost to the pitch-black hilarity is how scary all this was. Less than two years before the film’s January 1964 release, Moscow and Washington had nearly exchanged nukes over Cuba. JFK had just been assassinated. America seemed in no mood for high parody. (Imagine “Die Hard” after 9/11.)

But Kubrick’s flanks are covered by his cast. They seize and hold the citadel between earnestness and absurdity, patriotism and folly, driving audiences into defensive guffaws and disbelieving howls, just the cocktail Kubrick sought. Somehow, he (OK, he and the studio) whittled this down to 96 minutes, reflecting a tighter, non-blog world in which self-indulgence had a down side.

This is also a great ad for the American version of the free world: only a functioning democracy would encourage and absorb its antic drive. Fifty years later, hyperbole run amok, it feels hackneyed saying, “One of the greatest films ever,” but there you go.