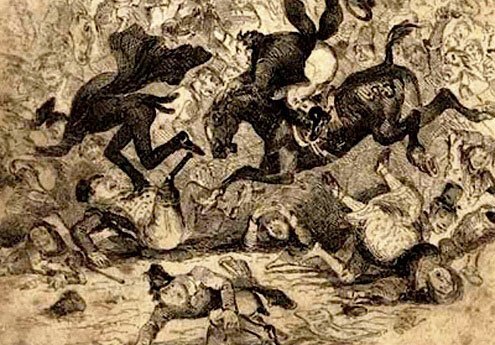 All social niceties were forgotten as push quickly came to shove and shove came to fisticuffs. In the end, none of them had any lunch...
M

y family and I are no strangers to the Spoleto hospital. In fact, rumor has it they are thinking of issuing us with loyalty cards. When we turn up at the outpatient desk, we no longer have to give our details. Each one of us is safely stored in the computer database, along with a list of all the mishaps that have taken us there.

In my own case, these are usually horse-related injuries, though I did recently have to have my scalp lanced to dig out a tick that had lodged itself during an expedition to pick wild asparagus. With my son, it’s generally something to do with basketball, while my two daughters have a knack of injuring themselves in a whole range of creative ways, including falling off the parallel bars at gym and, most memorably, climbing under an obstacle in a show jumping ring, so that a heavy wooden pole fell on a leg.

I must say that the service in Spoleto is unfailingly excellent, even down to the little card they give you which tells you whether you have been coded white, green or red — depending on the gravity of the injury — and how long you are likely to have to wait. So we were slightly puzzled when my husband, who until then had been the only one of us never to have visited the outpatient clinic, found himself waiting nearly three hours after hurting his shoulder playing five-a-side football. As an aside, a friend of mine who is a nurse tells me that 65 percent of all outpatients’ admissions are football-related.

But back to the uncharacteristically long wait in the hospital. My husband, by now getting singularly fed up and wishing he had never come, tentatively asked if it would be much longer before he was seen. He was told, with some disdain, that his case was not a priority and that there were a number of more serious injuries that had to take precedence.

It should be said that he had only been issued with a humble white card, the lowest of the low in the outpatients’ pecking order. It carries the ominous warning that these patients may have to wait indefinitely if more urgent cases arrive in the meantime.

Well, this was a holiday weekend, so it stood to reason that there would be more accidents, and to pass the time, we fell to conjecturing morbidly about their possible nature — a pile-up on the notoriously dangerous Flaminia between Spoleto and Rome, or a climbing disaster in nearby Ferentillo, where hordes of young people arrive each weekend to scale the side of a steep and slippery rock face? Maybe a family had eaten some poisonous mushrooms — oh no, wrong season. Perhaps someone had been mauled by a wild boar? We were getting silly now, as the long hours spent on those uncomfortable chairs began to take its toll.

As often happens, the truth turned out to be far more improbable than any of the ridiculous scenarios that we dreamed up as we sat in the corridor that interminable afternoon. But it wasn’t until the next day, after my husband had finally been X-rayed and sent home with instructions to take painkillers and apply ice packs that we finally learned the real cause of our long wait.

I was buying some groceries in the alimentari round the corner from our apartment when I found myself listening in on an intriguing conversation between the shop assistant slicing the prosciutto and the other one sorting out the cheeses. “Can you believe it!” said one, as he piled on the prosciutto, shaking his head in a mixture of disgust and disbelief. “What dreadful behavior — it’s all over today’s papers,” muttered the other one over the mozzarella and the pecorino.

Beside myself with curiosity, I asked what had happened. And then I began to put two and two together. According to the newspaper report that I later read gleefully, two families, one from Spoleto and one from Rome, had had the bright idea of celebrating the holiday with a good lunch at a restaurant in Monteluco, a well-known scenic spot overlooking Spoleto. Unfortunately, so had several hundred other people. In fact, the place was heaving, and there was just one last table to be had. Realizing the imminent danger of remaining without food, the two families, who until that fateful day had never set eyes on each other, charged to stake their claim. All social niceties were forgotten as push quickly came to shove and shove came to fisticuffs.

In the end, none of them had any lunch, for, under the horrified gaze of the other customers, the two families proceeded to beat the living daylights out of each other. They were ferried to the hospital by their less scathed relatives, and treated for a range of injuries, including several broken bones.