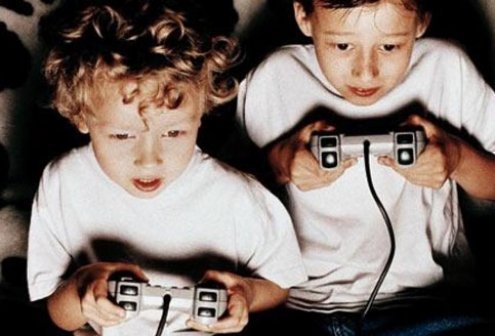 Policing video use can be exhausting: The wonder years of mechanical toys are dead and gone.
B

UT I WANT IT! he screamed and cried and flipped and flailed. And I want to choke you, I thought, but instead calmly quoted Mick Jagger, “You can’t always get what you want.”

He kept begging and I kept quoting.

“You can try sometimes and you just might find, you get what you need.”

Cheese and Rice, it is hard being a parent when your kids melt down and seem intent on rivaling the guy in the PCP-warning film we all saw in high school. Remember him? Freakishly strong, furiously angry, zero reasoning skills? My kids are not under the influence of PCP but they are addicted to anything electronic.

The addiction started off as most do, as occasional. It was literally controlled by bells and whistles (I used timers). Each child was allowed 30 minutes per day of screen time. Period.

Then, I got a bit relaxed. Or tired. I’m not sure which. And my time-constraint vigilance wavered. I started giving them 30 minutes of iPad or Wii playtime, adding cartoons when I needed to focus on something fun, like cooking dinner. Weeeee! (or Wiiiiii!) Before I knew it, they had a screen in their face more than I’d like to admit.

When it started getting out of control, I complained to a group of moms. One very cool, very smart, very good mother played devil’s advocate. “There is so much research out there about the positive effects of video game playing,” she said in her fabulous northern European lilt. “Video game playing could lead to a career in programming. They could become…” — she then spouted off a few names of web tycoons.

But I wasn’t worried about what they would become. I was worried about what they had become: Junkies. Erratic and cagey and always waiting for their next fix. My older one wakes in the morning jonesing for his 30 minutes before he even gets out of bed. The younger one demands videogame time as soon as I pick him up from school. When they’re not playing, they’re thinking about playing. Recently, my first grader did well on his report card. I told him a trip to the toy store was in order. He looked at me with disappointment and said, “Oh Man! Can’t I just have more minutes on the iPad?” Damn you “Cut the Rope 2”! Curses to the “Subway Surfer”! Those “Angry Birds” got nothing on me!

Am I to blame for this? Hell yes. When I’m not policing these games, I’m essentially their dealer! Is my husband? Probably even more so because: a. He loves technology and always wants the next great thing, and b. He doesn’t monitor IPad, Nintendo DS, Wii and Apple TV use the way I do. He’s more like their pimp.

So we share the blame, along with many other tired parents of this generation. At the end of a long day, after school and work and extracurricular activities, it’s easy to put a gadget in their hands and say, “Go!” – particularly in winter, and as a city dweller.

Last week, I prayed to some Amish God that he or she might bestow some non-electrical wisdom upon my parenting. To date, I’ve heard nothing back. Knowing this is my responsibility to fix, I’ve begun employing martial law and calling in the troops: namely white lies, fabrication and deceit.

Telling the truth only resulted in fits.

When they ask for the iPad I now say, “We had to take it in to get fixed.”

When they request the Wii console I say, “We are having a conversion problem with the American games playing in Europe.”

When they ask for Cartoon Network I tell them, “Go turn on Netflix and watch ‘Super Why.’ It’s educational.” Oops.

But we do need to learn moderation. Do the Rolling Stones have a song about that?