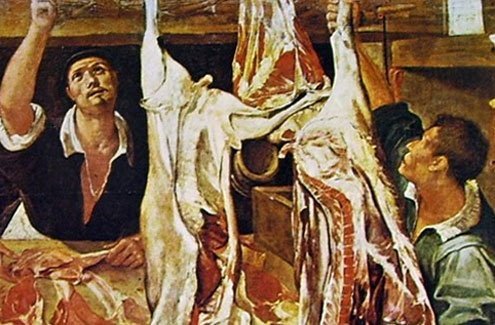 The quinto quarto is literally the "fifth fourth," including animal brains and intestine.
R

ome’s love of offal is timeless and well-documented, with historic dishes from the quinto quarto featured in many restaurants in Testaccio and beyond. Chewy tripe is topped with tomato sauce, sharp pecorino romano and earthy mentuccia, wild Roman mint. Animelle fritte, fried sweetbreads including the pancreas, thymus glad, and sometimes brains, are a classic appetizer, particularly in Rome’s Jewish restaurants. Slow-cooked coda alla vaccinara is a hearty and warming main course that will leave you picking bits of meat out of every last vertebra.

While these dishes were invented from necessity — which is at the core of all cucina povera (poor man’s fare) — many have acquired the status of delicacies among food lovers. Some even seek them out whenever in the city. While a little research can get you a lot of cucina povera, one dish remains difficult to track down: La pagliata (pajata in Roman dialect). Pagliata is the first part of the intestine of a young sheep or cow. The animal needs to be young enough to ensure it has been nourished on its mother’s milk (usually no more than a month old). As the animal is butchered, its intestine is removed intact with the partially digested milk still in it. When this is cooked, the milk curdles, thanks to the natural enzymes in the intestine, leaving the intestine full of what is essentially fresh cheese.

Unfortunately the traditional la pagliata was banned after the Mad Cow (BSE) scare of the 1990s, which led to a ban on the sale and use of bovine intestines. To keep the dish going, many cooks turned to lamb. It’s still tricky dish to prepare. The intestine must be cooked within a day or so of the animal’s death. Otherwise the milk can turn sour.

While it’s rare to see pagliata written on a restaurant menu or sitting in a display case at your local butcher, it’s still possible to track it down. At the American Academy kitchen recently, we had a trusted butcher slip some into a larger meat order so we could play around with it.

After carefully untangling the pieces, some of which were up to five feet long, we split what we had into two batches. We would serve most of it at dinner, prepared traditionally in sugo con rigatoni, an herbaceous tomato sauce. But we also put aside a smaller portion to experiment with on the grill.

For the grill, we carefully wrapped the intestine around wooden skewers and seasoned them with salt and pepper alone. Cooking them for about 10 minutes over medium-hot coals, they crisped up nicely on the outside. The milk inside curled just as it would if simmering in tomato sauce.

Cooking pagliata for our pasta dish proved a bit more complicated. It started with a sofritto of diced onion and small cubes of prosciutto. Once the onion had softened we added the pagilata, tied off in small rings to keep the milk in, and let those brown for about 10 minutes.

Then, with guidance from a recipe from Oretta Zanini De Vita’s “The Food of Rome and Lazio,” we deglazed the pan with white wine mixed with a heavy combination of herbs, including chopped rosemary, garlic and ground cloves. After most of the liquid simmered off, we followed that with whole peeled tomatoes, and then waited.

The outside of the intestine took about 90 minutes to soften. Once it became tender we removed the rings from the sauce, snipped off the butcher’s twine that held them together, and cut the rings into smaller pieces.

With these pieces back in the pot, some al dente rigatoni included in the mix, you almost couldn’t tell what the dish was. The pieces of intestine blended in to look like the pasta while the freshly curdled milk could have just as easily been fresh ricotta mixed in.

Sometimes the dish is served with the tied up rings left intact and laid out over the pasta. While I’m an adventurous eater, having ringlets of intestine staring back up from the plate might have even made me a little squeamish.

— Eleanora Baldwin is on leave. See Germano Zaini’s column for more on la pagliata and where it’s still served.