Down to the Dirt 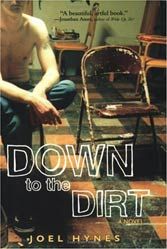 You realize Keith Kavanagh is trouble and going nowhere fast from the start of Hynes’s debut novel. The Newfoundland outport boy, only 13, loses his virginity to a woman twice his age. Then he nearly sets the town on fire. He frustrates and disappoints nearly everyone around him, but no one as much as himself. Keith does, eventually, get somewhere — down the highway to the provincial capital — but still remains down in the dirt. His roil in the muck is vivid and darkly entertaining.