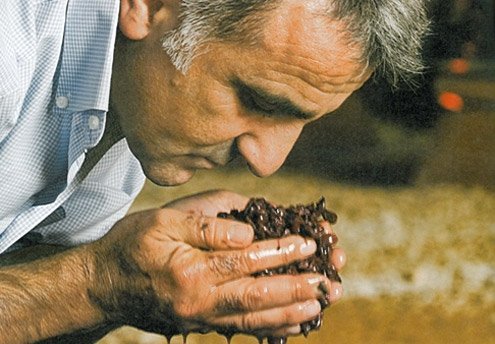 Giusto Occhipinti is one of COS's two owners.
F

lying from northern Genoa to the Sicilian city of Catania is like traveling from Boston to Los Angeles. As soon as you’re out of the airport you know you’ve entered another world.

My destination was COS (Cerasuolo di Vittoria), a biodynamic vineyard in the Ragusa province that has helped give Sicily’s Nero d’Avola and Frappato grape varieties celebrity status. Getting to vineyard’s hometown of Vittoria meant driving northeast to southeast across rough and barren landscapes. Once there, I found Giusto Occhipinti, one of COS’s two owners, who greeted me with glasses of his two flagship wines, COS Cerasuolo di Vittoria DOCG 2010 and COS Pithos Rosso IGT 2011. Both are 60 percent Nero d’Avola and 40 percent Frappato, with the latter fermented in clay amphorae.

Vivaciously cherry in color — cerasuolo means “cherry from the soil” — they danced together with ease and elegance, the “masculine” Nero d’Avola, spicy, earthy and tannic, joining the more “feminine” Frappato, which is fragrant and fruity. But the COS Pithos Rosso also had a streak of untamed and magical wildness.

Dressed in jeans, sneakers, his shirt-sleeves rolled up, Giusto Occhipinti is a fit fifty-something with a wry smile. Inviting his guests to dinner, he seemed both at ease and in charge (“We’ll just go out in to the garden, pick what we see and throw something together in the kitchen.”) First came a lesson in how to pick basil properly and find the ripest tomatoes, then a move to the kitchen where he gave everyone a meal task.

We ate on a terrace overlooking the vineyards, the meal opening with spaghetti in Giusto’s tomato sauce coupled with a “not yet for sale” sparkling metodo classico wine made with amphora-fermented red Frappato grapes.

Using the COS Locanda as a base, I traveled to three smaller nearby vineyards seek more Nero d’Avola and Frappato. Each proved to have a distinct personality.

— Ariana Occhipinti, Giusto’s 30-year-old niece, has made a splash with her “natural wines.” Like COS, she uses biodynamic methods with no yeast added in fermentation. Her Italian-language memoir “Natural Woman” recalls how she founded her business and grew it into a company that now turns out more than 100,000 bottles annually.

Her signature red “cru” is Occhipinti Grotte Alte Cerasuolo di Vittoria Classico DOCG 2008 (€35-40; with fewer than 5,000 bottles manufactured). On the label, she calls the wine a synthesis of “my Sicily” — and it is fruity, spicy and earthy, but not heavy. Less costly (€12-16) is Occhipinti SP 68 IGT Rosso 2012, 70 percent Frappato and 30 percent Nero d’Avola. The wine has no contact with wood and is fresh, delicate and lively, with fruit flavors.

— Gianfranco Daino is a passionate vintner who makes one red wine in small quantities (13,000 bottles) and operates near Caltagirone, a Baroque town and UNESCO World Heratige Site known for its pottery. Etna enologist Salvo Foti helped Daino plant his alberello (little tree) vines and adopt ancient bush-training methods (“To give each plant the right amount of soil and sun,” says Foti). “I Vigneri,” the name of Foti’s vintners’ association, is emblazoned on all Daino’s bottles.

The Daino Suber IGT 2010 is 50 percent Nero d’Avola, 30 percent Alicante, and 20 percent Frappato (€30-35). Rich, complex, and full of the aroma of wild herbs and eucalyptus, the wine is named after Quercus Suber, the cork oak that grows in the nature preserve Santo Pietro forest that surrounds Daino’s vineyard.

— Concetto Lo Certo of Antica Tenuta di Nanfro, also near Caltagrione, has a different philosophy. A compact man with an energetic personality, he grew up in Catania where his father successfully sold vino sfuso (unbottled bulk wine). “Extreme” or experimental wines didn’t interest him, he told me. Instead, he was after organic wines that tasted and smelled good thanks to modern vineyard and cellar techniques.