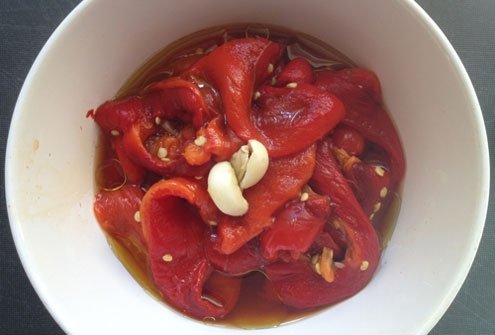 ou need to hurry. It’s almost too late. For peppers, I mean. The good ones.

This afternoon I went to the supermarket looking for inspiration. I normally check the vegetables first and then I decide what’s for dinner. I wanted to grab a bagful of some splendid looking tomatoes but when I put one in my hand it felt hard as stone. It was a Dutch tomato.

How, I wonder, can they make tomatoes that are so beautifully red and totally tasteless?

Please don’t get me wrong; I love Holland with all my heart. I’ve lived there for three years. I’m married to a Dutchman. But I love him and not their tomatoes (the Dutch export nearly a billion kilos of “fresh” tomatoes annually, mostly within the European Union). In fact, I don’t like any of Holland’s synthetic vegetables. If you ask me, they’re bags of water.

I bought Sicilian tomatoes and gorgeous juicy-crispy bell peppers. Their season is almost over. If I’m lucky, I probably still have a couple of weeks of sun-ripened Italian peppers. After that they’ll be replaced with substituted with the greenhouse Frankensteins. No thank you. I’ll wait until June.

So, assuming you live in Italy, here what you need to do as soon as possible.

Go to the market and buy as many red or yellow peppers as you can fit into the largest roasting tin you have.

Make sure to buy thick-fleshed peppers. Wash but don’t cut them. Don’t oil them either.

Line your roasting tin with aluminum foil and cook the whole peppers in a preheated oven at 220C (430F) until they’re blistered and slightly charred. Using tongs (no, not thongs), turn them around every 10 minutes or so.

The cooking time depends on the size of the peppers, but count on 20-25 minutes. Don’t overdo it. You only want the skin to look papery and detach from the flesh.

Remove the peppers from the oven and transfer them in a brown paper bag or wrap them in several layers of paper towels. Let them cool. The steam will loosen the skin so you can remove it quickly.

When the peppers are cool enough to handle, place them on a cutting board, open them in half, remove the seeds and stem, and peel off the skin.

At this point you can freeze the peeled roasted peppers in portions and enjoy the summer flavor for months to come.

If you want to use them immediately, add 1 crushed clove of garlic every 3 peppers and toss with good extra virgin olive oil. Refrigerate them for at least 4 hours, or, better still, leave them overnight to infuse. The next day add salt, basil leaves, and some chopped tomatoes and serve them as a salad or appetizer with toasted crusty bread.

It’s not a perfect system, but at least you don’t have monsters in the house.