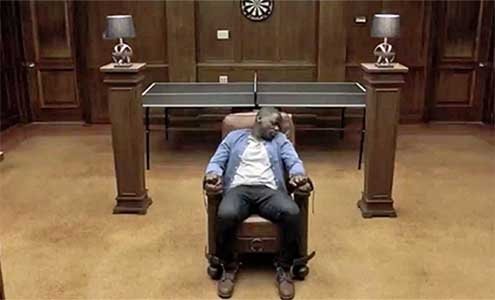 A lot more than meets the eye in Jordan Peele's "Get Out."
T

he movie “Get Out” is a crackerjack thriller and the fine wine of horror, brimming with notes of conspiracy and paranoia, isolation and desperation, with a pungent nose of basement experiments. Not since “Seconds,” John Frankenheimer’s 1966 black-and-white masterwork about eternal youth, has medical science been portrayed as so ruthless and immoral. And not since “Rosemary’s Baby”(1968) — like “The Stepford Wives” (1975), from a novel by Ira Levin — has Hollywood captured so powerfully the revulsion of being betrayed by those we trust.

At the center of this riveting drama is a young inter-racial couple, Chris (Daniel Kaluuya), a handsome, genial, soft-spoken, and observant photographer, a 21st-century version of Sidney Poitier in “Guess Who’s Coming to Dinner” (1967), though with features that emphasize his race; and Rose (Allison Williams, from TV’s” Girls”), who couldn’t be whiter, prettier, or more devoted.

And come to dinner they do, to the columned, plantation-like home of Rose’s father Dean (Bradley Whitford), an edgy neurosurgeon, and mother Missy (Catherine Keener), a cloying, intrusive, psychotherapist with a talent for hypnotism. The estate is staffed with black servants with creepy characteristics. Georgina (Betty Gabriel), the maid, wears a wig and has a blankness that is a throwback to the zombie-like “Stepford” women. She is curiously ignorant of the term “ratted out,” using the dated word “tattletale” instead. The groundskeeper (Marcus Henderson) spouts white racist views on the Chris-Rose relationship and sprints across the lawn in the dead of night in an echo of Jesse Owens’s triumph at the Hitler-era Berlin Olympics. Jeremy, the family’s son, is creepy, too, strumming a ukulele on the veranda, a less-than-fully-civilized low-life out of Faulkner or “Deliverance” (1972), another vintage horror/thriller.

The opening scene, one cleverly not fully explained until the film’s end, should give us pause and does. But the bumbling humor and civility with which Rose and Chris are received, and Rose’s commitment to her boyfriend, distract one from reading the clues that this dinner isn’t at all like the one Poitier attended 50 years ago.

And clues there are in a complex, layered screenplay by director Jordan Peele. One is Rose’s revelation that she has never before dated a black man. Another is her apparent surprise that a visit home coincides with a yearly neighborhood gathering. At that gathering, Chris is at first pleased to see another youthful black man. But Andre (LaKeith Stanfield), when he turns around to meet Chris, has a vacant look and wears a ragtime-era straw hat, while accompanying a white woman twice his age. Andre responds to Chris’s proffer of a fist-bump with a handshake.

Missy’s excessive concern that Chris is a smoker, given the situation, is yet another clue. His psychological vulnerability to Missy’s therapeutic interventions, chillingly exploited by her, is foreshadowed on the couple’s drive to her parents’ house when their car collides with and kills a doe (and a deer comes into play later, when Chris knows all too well what is going on). In retrospect, nothing could be more significant than Georgina’s wig or Andre’s hat.

To Peele’s credit, it doesn’t all come together until it does — with the unexpected appearance of a box of photographs — and by that time, it’s too late to avoid the grisly stuff. Not too late, though, for the intervention of Chris’s black sidekick Rod, a crude, funny, highly competent, and determined TSA agent (played brilliantly by Lil Rel Howery), whose understanding of white people (as they’re presented in this film) and what’s happening on the Armitage estate far exceeds Chris’s more studied reflections.

“Get Out” has been described as a critique of the post-racial society, both by critics and biracial director Peele. The not-so-veiled racist comments of the neighbors, who touch Chris’s muscles and want to see his golf swing (he doesn’t play golf), are among the film’s many uncomfortable reminders that America has yet to put its racist past behind it. In this reading, the film’s plunge into horror suggests that day-to-day racism is grounded in white disrespect and venal contempt. That may be, but the absurd idea that ordinary racism is somehow in league with calculated murder and Nazi-like eugenics may be more likely to open wounds and widen fissures than to serve as a cinematic opening to discussion, debate, and reconciliation.