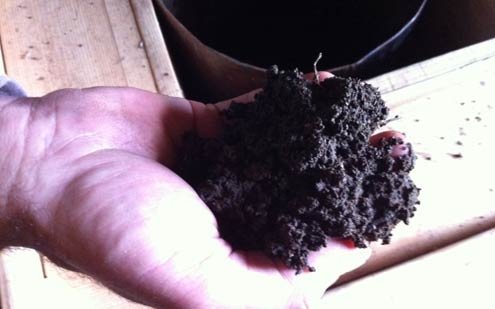 he winemaker began with this line: “The first thing I have to show you is our dirt.” He then rolled open a door leading into a darkened space that was once a stall at Tenuta di Valgiano, a winery situated among the hills outside the small Tuscan city of Lucca.

In the dim light, he led me to a barrel and opened the top, “Go ahead, scoop out a handful and smell it.”

“Mmmmm. It smells sweet and rich,” I said.

“How does it feel in your hand?” he asked.

“See the hole where you scooped out the dirt,” he pointed, “When I come back tomorrow morning, that will be flat again and there will be no sign of the missing handful,” he said.

“How is that possible?” I asked.

“Because every gram of this biodynamic humus is alive with 500 million microorganisms. They’re at work all the time, making the soil healthy.”

I had heard many explanations of biodynamic agriculture, with most sounding esoteric and vague, but Saverio Petrilli’s views were both clear and concrete. “We make the ‘500’ humus by filling a cow horn with dung and burying it from November until March,” he said as I followed him to the vineyard. “Then, we dissolve the humus in water that has been energized in a double vortex. As soon as we spray that mixture on the soil in the vineyard, the microorganisms go to work.”

“Worms appear. At first, big ones I call ‘bulldozers.’ Later, smaller ones do the finer work. They de-compact the dirt until it gets crumbly. ”

He shoveled up some dirt to show me its texture, how soft and aerated it was. “Soil like this absorbs water easily. Our vines did fine in last summer’s heat while many others around here suffered.”

We returned to the small office in the cantina where Petrilli introduced me to Laura Collobiano, who along with her husband Moreno Petrini, are the land’s resident owners.

They showed me photos of regular, compacted dirt as compared to biodynamic dirt. “Once the dirt is healthy, we don’t have to add any fertilizer, organic or otherwise. Nature does all the work for us,” said Petrilli.

After the “dirt seminar,” Petrilli grabbed two bottles of wine from the cantina and invited me to join the vineyard workers for lunch in the kitchen. They sit together daily, taking turns preparing and cleaning up.

We shared a huge plate of broccoli pasta for the first course and an entire fish, pan sautéed, for the main one. There was casual banter mixed in with talk of what needed to be done in the vineyard that afternoon. And, of course, we drank the wine.

On the same trip to Tuscany, I visited two other biodynamic vineyards: Podere Forte in Val D’Orcia owned by Pasquale Forte, whose home and factory are in Como, and Caiarossa near Bolgheri, owned by Eric Albada Jelgersma, a Dutchman who has two other vineyards in the Margaux region of Bordeaux. As wealthy, absentee owners, they have both hired highly qualified teams of experts to manage their young vineyards and ultra-modern cellars.

Clearly not a penny has been spared in either place. Caiarossa even has even found a suitable marketing slogan: “The luxury of nature.”

I wasn’t able to taste Podere Forte’s sold out top wine Podere Forte Guardiavigna IGT (€55-60). It is a Bordeaux blend that changes yearly based on varying combinations of cabernet franc, merlot, cabernet sauvignon and petit verdot.

Instead, I sampled Podere Forte Petrucci DOC Orcia 2008 (€60), consistently produced as 100 percent sangiovese. The wine was good but not distinctive enough to justify the price.

At Caiarossa, I tried Caiarossa 2009 IGT (cabernet franc 25 percent, merlot 21, sangiovese 19, cabernet sauvignon 18, petit verdot 8, syrah 6) (about €40) and Pergolaia 2009 IGT (sangiovese 85 percent, merlot 10, cabernet franc and sauvignon 5 percent each) (about €16). The first lacked complexity, richness and persistence and the second had a strong saddle or stall aroma that was genuinely unpleasant.

Since making these visits, I have mulled over a telling remark by the winemaker at Tenuta di Valgiano, whose wines were the best: “Years ago, farmers really paid attention to the soil because there were no chemical alternatives to natural farming. They farmed and made wine knowing their lives literally depended on it. We have the same attitude.” And a winning one.