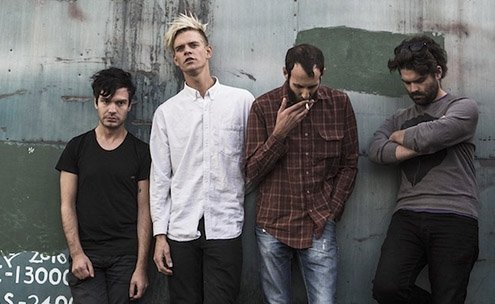 Instead of fighting for its name, Viet Cong became Preoccupations.
I

f you’re looking for a long and convoluted mess of a story behind your music, you’d be hard-pressed to find a better example lately than high-profile post-punk purveyors Preoccupations. The Calgary band’s self-titled debut, while smart and anything but sloppy, has a very peculiar genesis.

You could call this a debut, if saying so didn’t feel more than slightly disingenuous.

After the disintegration of Women and the death of guitarist Christopher Reimer in 2012, bassist Matt Flegel and drummer Michael Wallace linked up with guitarists Scott Munro and Daniel Christiansen to form Viet Cong (remember that name), which self-released a cassette in 2013 and followed that with a 12-inch EP in 2014.

Indiana label Jagjaguwar knew a good thing when it heard one and signed the musicians to record a full-length, another self-titled effort released as Viet Cong in January 2015.

That’s when all hell broke loose. It started when Viet Cong was scheduled to play a festival in Australia, only to be removed because some felt the name Viet Cong was culturally offensive. Similar complaints arose before a concert date at Oberlin College in Ohio, this time with ample fuel from the Internet’s tireless rage engine. The Oberlin show also collapsed (the promoter’s comment: “I acknowledge the problematic nature of a band naming themselves ‘Viet Cong’ and extend my apology to anyone hurt or made uncomfortable by the name and its connotations.”)

Under pressure, Viet Cong didn’t have the sense to admit they were just being provocative. Like gutless stooges, they pled ignorance and spent seven months searching for a new name. Friend of the band Chad VanGaalen — an accomplished songwriter — suggested the neutered moniker Preoccupations. It stuck.

The good news is that there’s little change in sound. The name may be different, but Viet Cong and Preoccupations are one and the same.

The band’s territory mines a very specific range of influences from the turn of the 1980s — Joy Division (speaking of problematic), Gang of Four (again), Suicide (and again), Wire around 154, and early Bauhaus. The debt is unmistakable and it rings out from the eerie opening of “Anxiety,” which kicks off the album with more than a minute’s worth of ambient buzz that leaves a bitter metallic taste left in your mouth. Then comes Wallace’s kickdrum, shifting gears on a dime.

Flegel’s lyrical tendencies have also remained intact. A cursory look at the song titles (“Anxiety,” “Monotony,” “Degraded,” “Forbidden”) is a clear tip-off: this is tough listening. Flegel’s opening couplet sets the mood: “With a sense of urgency and unease / Second-guessing just about everything,” with the last word stretched out for effect. Flegel’s moments of melody — his delivery is mostly affected, nigh-deadpan — seem all the sharper precisely because melody isn’t part of his disposition.

Also credit the songwriting, which seems a shade sharper than what Viet Cong had on offer. Keyboards brighten the edges of the mix, though the band’s use of keys and synthesizers differs little from (for example) fellow Canadians Operators. What is different is the dour glaze Preoccupations brings to its music. Preoccupations‘ 11-minute centerpiece, “Memory,” mirrors Viet Cong’s 11-minute “Death.” Ostensibly similar, “Memory” has more movements and melodic effects, swirling around Flegel’s lyrics as it transitions from a cold post-punk number to swooning new wave romance (featuring Operators’ Dan Boeckner on vocals, incidentally). It’s more complex on every level and shows real songwriting growth. Dour is a reduction if you’re willing to give the album a chance.

The long tracks are followed by shorter numbers (two at four-minutes, two at one-minute), which suggests Preoccupations is comfortable writing at any length. Set pieces give way to main attractions. That it all comes together as seamlessly as it does is impressive, the more so for its daring to venture into such tired territory.

Say what you want about noise surrounding the music, since it’s riddled with tedious misjudgment and poor decisions. But the music itself is not. And that’s what matters.