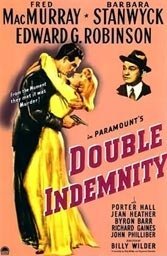 Director Billy Wilder’s James M. Cain-fueled insurance scam caper is so close to perfect it hurts. But the one misstep, absent chemistry between the leads, makes the whole less engaging. First the good part: Walter Neff (Fred MacMurray) is an impressionable two-bit L.A. policy peddler who does the little things well and pays little attention to the bigger picture, unless a dame distracts him, and she does: She’s Phyllis Dietrichson (Barbara Stanwyck), the wife of oil man Tom Powers. Once a nurse to Powers’ dying wife, Phyllis is now his reluctant partner and pseudo-mother to his teen daughter Lola.

Walter, who “Dictaphones” the narrative after the fact, is instantly smitten. Together, they hatch a train accident plot to collect double indemnity policy worth 100 grand. All that stands in their way is Walter’s crafty boss, Barton Keyes (the wonderful Edward G. Robinson), and his scam-sensitive gut.

What doesn’t work, regrettably, is Walter and Phyllis. She, he’ll tell you, is a “red hot poker.” He can’t resist her because “her hook is too strong.” But that never seems evident. MacMurray, a straightforward, even boyish actor, struggles as a conniving, sex-driven man. Stilted Stanwyck also wrestles for a credible Black Widow gear. No sparks fly.

Wilder’s second-sense for quips and his preternatural understanding of how people create and respond to duplicity put this chemistry lapse into the background as the noir darkens. The movie’s sirloin, the murder and its aftermath, has wonderful frayed edges — including Lola and her on-again, off-again boyfriend, and the ever-prying Keyes, who often carries the film.

Still, a girl ostensibly triggers Walter’s scheming, but neither he nor the girl ever heat up (except when love turns to hate), making a hard premise limp. Which begs the question why make a lust-based thriller when you can’t floor the lust? Ask Raymond Chandler and Wilder, who co-wrote the script from Cain’s novel. They seem in perfect harmony minus the friction between the two leads on whom the story depends.