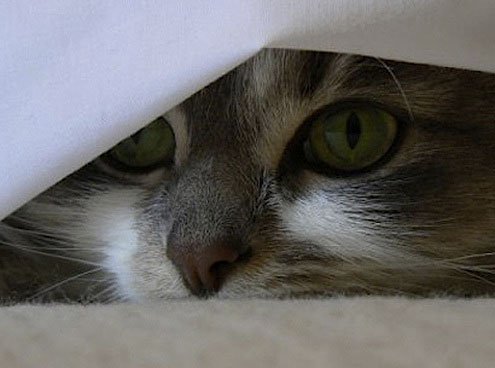 Dora licks between my typing fingers, a sex goddess in the making...
D

ora the temptress is uneasy. Summer yields confusion. She can’t decide between seduction and mothering. Or when just to fetch. Mischief submits to instinct before doubling back. Dora lolls on baked tiles and spreads her fingers. She yawns. Against the countless advances of the slow sea — it’s the Mediterranean — she puts up a nap. Or an adventure that involves licking. The temptress loves licking.

Freud had a patient named Dora (a neutral name), a teenaged hysteric, a coughing mute with a bad temper and sweet dreams of burning houses. He never solved her anxieties. Nineteenth-century Dora stumped Freud as 21st-century Dora stumps me.

When I am momentarily distracted, Dora will gradually bring me back, but not before I read. She is uninterested, for example, in the newspaper headline that today catches my eye: “In Iraq, a Perilous Alliance with Former Enemies.” It explains that American forces are courting militant Sunnis to win the peace (though the word itself is dubious). I am reminded of a similar befriending two decades ago. At the time the “perilous” ally of choice was Saddam Hussein, whose pre-emptive war on Iran was embraced by eager Washington.

Former enemies, I tell stretching Dora, have a way of turning into bedfellows when errors in judgment shrink the sleeping space. Like drunks who can’t remember faces, we bed down with old mistakes.

But Dora just paws the air with her nails.

Elsewhere in the newspaper I find a report about the increasingly less interesting (to me) presidential candidate Barack Obama. He has announced he would intercede in Pakistan and elsewhere in the near East to fetch terrorist heads. It is, I sigh, the classic kneejerk of the year before, the centralizing of mean and uninformed positions to assuage ripples in the American tractor belt. Soon, vision will cancel itself (it must) and Obama’s promise will regress to the mundane. The tool of choice will be volume alone. One-upmanship will challenge bravura for airtime, and vice versa.

Dora licks between my typing fingers, a sex goddess in the making — and a persuasive one. She pries loose a bundled towel and puts her tongue to the salt, the beach’s male-coated leftovers. Late in the morning, my host wakes and cautions me. “Be careful,” he whispers. “She’s obsessive-compulsive.”

That’s obvious since she sleeps with me. She’s a partner like a murmuring sea. Disturbance pricks her.

Lest you desire Dora (and why not?) there are caveats.

She still nurses on my friend’s nipples. My friend is a grown man. She sees his red shirt — red is her cue — and joins him on the couch. She then suckles the shirt just above frayed script that reads, “Cool Rinning.” “Rinning,” on Italian T-shirts, is a suitable synonym for running. But Dora doesn’t know this. She installs herself and nibbles. Something from her infancy: A memory of a mother, of a precise but unsatisfied need.

My friend, a psychoanalyst, says he will some day take on Dora as a patient, but not yet. She’s too moody, distracted, cash poor. Nor does she speak Italian.

Dora the temptress does other curious things, but these are later at night, when only I’m awake to watch them. She plants herself on my friend’s desk, an oblong slice of wood on concrete pillars, and rummages through his things. She knocks down photographs of a wife, and old lover, a grinning child. Like an incompetent and careless spy, she pokes at his correspondence, a bored stack of letters held together by a yellow clip. From this stack, she extracts one letter, then a second, examines its contents for clues (an affair?), and carries one or the other across the room to deposit in front of his bedroom door, which he closes at night. He prefers sleeping alone in summer. Dora looks like a soft dog.

Missing him, and tiring of these epistolary missions (three at least), she finally nestles with me. I rarely say a word.

Until she gets closer.

What are you thinking? I ask Dora, her face buried in mine. What’s in that little head?

But Dora the temptress ignores me and finds her corner of the bed. Anthropomorphic conversation is out of the question. Her thoughts are elsewhere. Her stand-ins for men are nipples and envelopes and a world friendlier to personal eccentricity. Food plays a role. Eyes open and close. Finally, she sleeps.

Dora, I think aloud — and I’ve been made restless by a fear of former enemies, by Barack’s immolated Pakistan, by hysterical television; Dora could be my life’s companion: complex, unpredictable, driven, and just a little mad. A case study in my bed, me sleeping with a feline other.

Dora the temptress, my friend’s wayward lover, for tonight a borrowed cat of my own.