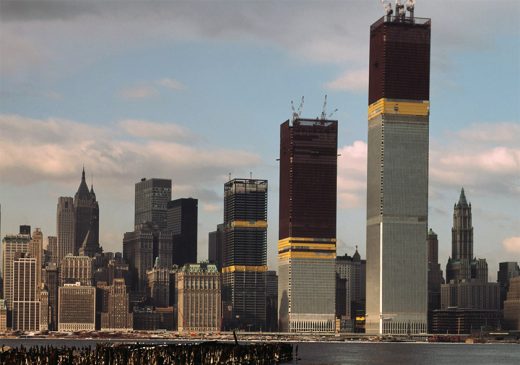 New York City's Twin Towers: Make them tall was an order. So was carving out maximum rental space. As a result, matters of strength fell lower in the pecking order.
N

ot many people now remember how roundly loathed the Twin Towers of the World Trade Center once were. Only when they were destroyed by Saudi terrorists in the September 11, 2001 terrorist attacks did the Manhattan skyscrapers attain sainthood. Until then, New Yorkers despised them, for a series of reasons.

To clear the ground for their pet project, David and Nelson Rockefeller used the Port Authority of New York and New Jersey to bulldoze Radio Row, a vibrant historic neighborhood.

Another critic, Paul Goldberger, called them “boring, so utterly banal as to be unworthy of the headquarters of a bank in Omaha.” Writing in “Harpers,” Wolf von Eckhardt went even further, calling them a “fearful instrument of urbicide.” Others labeled them grandiose, boring, grim, and vacuous, with some suggesting they were objects of extreme hubris.

And that criticism applied just to their outside look. Their ground floor lobbies resembled Gucci showrooms without Guccis. The vacuous marble displays were so tediously uniform as to be indistinguishable from plastic. And these staid lobbies were the high point of the buildings’ interior design.

In essence, these architectural monstrosities were built with only two goals in mind: to cram 13.4 million square feet of rentable office space into a relatively small building site, and slightly to quench the pharaonic obsessions of the Rockefeller brothers (at the time, the Twin Towers were the tallest buildings in the world.) In the service of these two requirements, the project engineers made decisions that would lead to the collapse of the towers on 9/11.

In order to push the towers to 110 stories tall, they had to be very lightweight. To that end, the beams that in a conventional steel building supply the horizontal structural strength were replaced by trusses —composites of thin pieces of steel that, when compared to I-beams, were more like cobwebs. These trusses were weak and fatally vulnerable to fire. The fireproofing, limited to spray-on asbestos and other mineral fibers, didn’t adhere well to the lacy elements of the trusses, so it either failed to stick in the first place or it fell off as a result of normal vibration. Without fire protection, they heated and deformed rapidly.

I worked at the World Trade Center as a carpenter for several years and got to know them very well. I knew, for example, that the inspectors for the landlord, the Port Authority of New York and New Jersey, were deeply concerned about too much weight being placed on any one of these trusses. Contractors had to spread out their materials to avoid bending them.

I was thousands of miles away from the Twin Towers on Sept. 11, but I could have died there. I had worked for months on the floors occupied by Cantor Fitzgerald, where 658 people were trapped and killed by fire or died in the collapse. I often had my morning coffee in the cafeteria of Fiduciary Trust, which was on the north side of the tower struck first. That cafeteria was directly in the path of the jet.

Why the towers collapsed was and remains a question of great personal interest to me. Over the years, I’ve repeatedly considered and researched the subject. I believe reports issued by the National Institute of Standards and Technology (NIST) and the Federal Emergency Management Agency (FEMA) were correct in concluding the towers were not destroyed by the impact of the jets or melted by jet fuel. They were not blown up by the U.S. government in collusion with Israel or by anyone else.

What happened was that jet fuel ignited the contents of the offices in the impact zones. Heated by these fires, the trusses first expanded and then sagged, pushing and then pulling the exterior steel columns out of alignment. When the pulling reached a critical point, those columns buckled, collapsing all the weight above them onto the floors below and initiating a progressive disintegration of the buildings.

It was amazing to see how little was left after the towers came down, but it made sense. All the steel framing between the core and the exterior of the towers was, in structural terms, gossamer. It had to be because with the materials and techniques available at the time the architects and engineers had to pare every ounce of weight in order to make the towers as tall as they needed to create sufficient rentable space to make the real estate profitable.

Other steel frame buildings have survived much worse fires than those that brought down the towers. See for example the February 1991 fire at One Meridian Plaza in Philadelphia. That blaze burned for 18 hours and completely engulfed eight floors of the building. Some of the beams on those floors sagged by as much as three feet, yet there was no collapse.

The building at 90 West Street, adjacent to the Twin Towers, was set on fire by falling debris from the skyscrapers. It burned for a week until there was nothing left to burn. Afterward, one beam in the building was found to have sagged by an inch and a half. But it stands to this day.

How sagging trusses led to the buckling of the outer wall.

No one could have predicted that anyone would fly commercial jets into the towers, but the point here is another: safe engineering practice is to include enough robust structural redundancy to ensure survival in unanticipated circumstances.

No one expected that a World War II bomber would hit the Empire State Building, but when it actually happened on July 28, 1945, there wasn’t the remotest chance the building would collapse.

Not only were the Twin Towers ugly and soulless, but they also failed the simplest requirement of human habitation — not to fall down and kill the unfortunate people trapped inside.