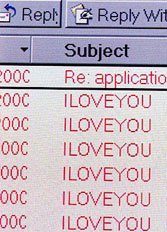 ’m going away for ten days next week, and to be honest, a part of me is dreading it. It’s not where I’m going that worries me. It’s a skiing holiday in Austria — it’s not as if I’m going to have my teeth pulled out. It’s just that I know the whole time I’m away there will be this nagging feeling about what will be waiting for me on my return.

I’m talking about all those emails that will be sitting in my computer, begging to be downloaded. Just doing a quick calculation — if I receive, as I do, around 50 messages a day, that will make 500 emails to plough through as soon as I get back. Welcome home! Of course, a fair number of those will be invitations to improve my sex life, or buy a new miracle anti-wrinkle cream, and I shall take great satisfaction in blitzing those immediately. That always makes me feel a bit better.

But what about all the others, the ones from work and, almost worse, the ones which aren’t spam at all but which are sent by so-called friends? I’m the first to agree that email has changed life for the better in many respects. It means I can work from home, or from just about anywhere, and it certainly beats schlepping round to Rome’s main post office, as I did in the old days, to send my articles by telex, a painfully slow and costly operation. But am I the only one who feels that the whole email merry-go-round has somehow spiraled out of control? The trouble is, of course, that it’s just too easy to send them. So suddenly, people who wouldn’t normally have dreamt of putting pen to paper can send their innermost thoughts to all and sundry with a few strokes of the keyboard. These days, everyone’s a writer.

What I find strangest of all is that these days, everyone’s also a nerd. Am I missing something? I mean, was the entire world suddenly given free computer coaching while I was asleep (or maybe we didn’t hear about the offer here in darkest Umbria)?

Even the most inept acquaintances suddenly seem au fait with computers and spatter their conversation with techie-speak. The other day I sent out a mass emailing to alert people in my address book that I was changing my address, an exercise that caused me no little grief. Within minutes, a reply came winging back from an old friend in Hong Kong, advising me helpfully that next time, I should “use the BCC field. Address the email to yourself and paste all the other addresses in the BCC field.” Oh fine, thanks for that useful tip.

One of the most irritating habits is when people copy emails for your attention, when you know perfectly well it’s just a ruse to cover the sender’s own backside. When wearing my other hat, as editor of a magazine put out by an institution, I am the unwilling recipient of scores of messages, most of them very long and boring, sent by people who want to justify their salaries, and make sure that they carry on receiving them. So I welcome the news that some U.S. companies are now imposing a one day a week ban on sending emails, in the hope of raising productivity and encouraging staff to go back to that old-fashioned method of communication — talking to each other.

Of course, emails can do a lot of good. I applaud the Internet campaign that helped revoke the death sentence by stoning against the Nigerian woman Amina Lawal. And I’m equally happy, though obviously distressed, to receive pleas for help on behalf of children suffering from rare diseases, though there is little I can do to help them. I’m slightly less enthusiastic about the Zen-type musings that regularly find their way into my mailbox, full of cutesy homespun philosophy and more often than not accompanied by some veiled threat to the effect that if I send this email to ten friends I’ll receive a wonderful surprise.

Yet the ones I really dread are the jokes, especially when they come in the shape of bad taste video clips. Just scrolling down through today’s messages I see I’ve been lucky enough to be sent three side-splitters. The titles Mammary-Memory Test, Birds and the Bees, and the Ten Commandments of Marriage give me some idea of the kind of treat I’m in for if I open them.

But it will take a lot to beat yesterday’s offering, sent by a friend who I always thought had a brain. It was an animated graphic of a snowman, made to look like a male organ, spewing out tiny snowballs. Now how classy is that?